Barn Spotlight: The structure retains all of its original bins, leather belts and metal drive equipment. 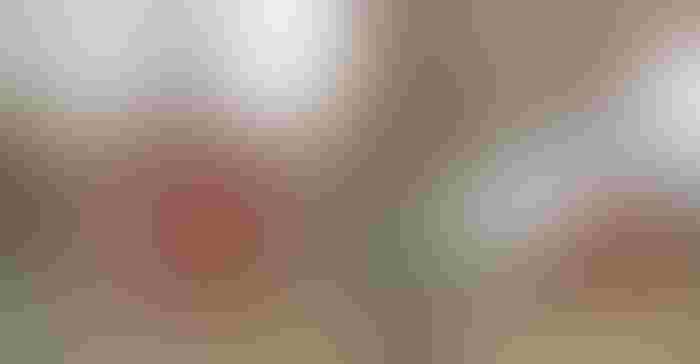 In the late 1970s, farm buildings along my route to work became familiar friends. One, part of the Myron Avery Sr. farm — along Verona Road west of Marshall, Mich. — was a granary with a neat cupola.

I wondered about the granary’s innards. Little did I know a masterpiece of technology made up its extraordinary interior.

My husband and I moved to Battle Creek in 1982. Occasions to pass the granary were fewer. Each time, it looked more tired and at risk. Water seeping in would be a death knell as it is for barns.

By 2018, Tyler Avery, Myron’s grandson who runs a trucking business from the family farm, was debating what to do with the granary his grandpa loved. Built for a different day in farming, it wasn’t of use to his operation — unlike the large family barn, which had been repaired and adapted.

“We knew the granary had a story, but what was the best option for its future?” Tyler pondered.

The 24-by-24-foot granary is 38 feet to the top of its cupola. It began life just across the road from the Avery farm between 1853 and 1855. There, on the Isaac and Elvira Lockwood Farm (now listed on the National Register of Historic Places), it did what few granaries of its time could do. It used mechanization.

Grain would be dumped into a chute on the outside of the granary, filling a large wooden box on the main floor inside, where a leather belt with metal cups scooped up the grain, carrying it up to the cupola.

As grain fell, more gears directed a movable chute over one of four bins, each holding 1,000 bushels on a center level. Grain could also be offloaded from the granary to wagons or bags. The belt powering the system worked from a pulley mounted to the granary’s west wall.

Bob Parker, 86, grew up nearby and remembers helping at threshing time. “I was just 7 or 8 years old,” he says. “The old codgers would fill canvas bags on the wagon, and we would get them step by step up and inside. Men would carry them to the bin. They threshed for three days. The wives made big meals at noon. We worked hard, and we ate big.”

In the 1800s, according to Ron Quinn — who with his wife, Ann, restored and lives at the historic Lockwood farm —  the granary belt was first driven by a steam engine and, in its latter years, by a tractor. Built in the Italian villa style, the granary matched the look of the Lockwood house of the same time period.

The granary was moved across the road in the early 1900s to Isaac Lockwood’s nephew’s farm. Glenn Lockwood was the last Lockwood to farm in Marshall Township and the last to use the granary circa the 1930s. The Avery family acquired Lockwood’s farm about 1951.

“When the State Historic Preservation Office reviewed our nomination for the Isaac Lockwood farm to have historic status,” Quinn explains, “they said the granary was one of a kind, very worthy of being preserved.”

A stellar feature is that it retains all its original bins, leather belts and metal drive equipment, likely engineered by the Lockwood family. All gears and pulleys are intact.

The Averys, Quinns and others strategized how best to save the granary. Inspired by Vic Parker, a descendant of earlier owners of Lockwood Farm, the structure was donated to the Calhoun County Agricultural & Industrial Society, which operates the Calhoun County Fairgrounds, home to the longest-running county fair in Michigan.

CCAIS board president Doug Wildt said, “With the fair’s roots in agriculture and a mission of showing farmers the latest technology, it made perfect sense. The granary would join the Old Maple Grove Church, Houston School, Floral Hall and the Floyd Sweet Fair Museum, other historically recognized structures on the grounds.

Parker Boring exudes enthusiasm. “I am passionate about connecting present-day use of the fairgrounds to history,” she says. “We have created a ‘sensory table,’ which gives people, especially children, the chance to learn how grain was handled, milled and became cereal. They remember things best through hands-on learning. We will be doing a video with local people, like my grandpa, Bob Parker, who knows farming and agricultural history!”

As 2020 closed, the granary was carefully sectioned into three pieces, loaded onto flatbeds and began a 5-mile trek through downtown Marshall to the fairgrounds, where it was set on a new foundation. The decision was made not to pursue precise historic restoration, but to preserve the essence of the exterior while focusing on restoring interior mechanisms to full working order.

When completed, the Lockwood/Avery Granary will be operated during fair week and events. Emphasis will be placed on giving children hands-on experience in understanding early farming, perhaps operating a miniature belt and bucket system. The “Old-Timer Tractor Club” will assist in operating the belts and pulleys.

Grants to save the Lockwood/Avery Granary have come from Barn Believers Community Project Fund held by the Battle Creek Community Foundation, The Andersons, the Marshall Rotary and Cronin Foundations, Albion Community Foundation, and the Michigan Department of Agriculture and Rural Development, as well as many donations from area residents.

The concrete basement and pad, as well as the rebuilding of door hardware and track were donated. A portion of the Barn Believers grant has been designated to support educational programming.

The Lockwood/Avery committee wants to know if other granaries such as this one exist, and to learn from those who may have worked at this one. Email Ron Quinn at [email protected]

For more information on the granary and to make a donation, visit calhouncountyfairgrounds.com/granary.

Arnett is the author of “American Barns” and co-founder of Barn Believers Community Project Fund, barnbelievers.org. Visit jancoreyarnett.com. Special thanks to Ron Quinn for his assistance with this story.