Barn Spotlight: The barn at Van Gilder Farms has served several purposes through the years. 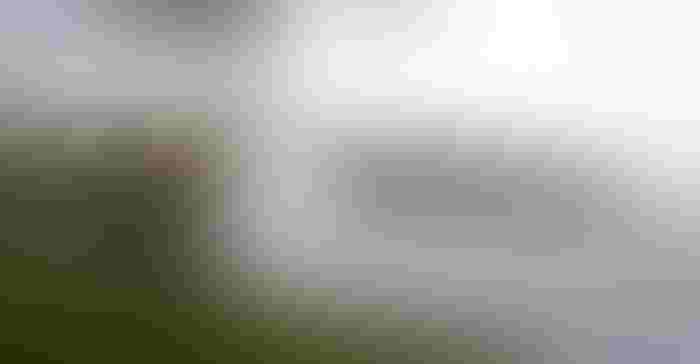 Sixty-acre Meadow Brook island is surrounded by a Van Gilder ocean of land. From any loft window of the island’s stately, white, T-shaped barn, something belonging to a Van Gilder can be seen — grain and corn elevators to the west; an agri-tainment “haunted” barn to the northwest that some might mistake for a meat processing operation because of its distinctive name, “SlaughterHouse,” and unusual mural; and flowing all directions, more than 1,000 acres — an ocean of crops.

The Van Gilder name is as well-known in the Fowlerville area of Michigan as the Dodge name is in Rochester. John Dodge made his fortune in the automotive industry, when he and his brother, Horace, founded Dodge Motor Co. in Detroit in the early 1900s. Fred Van Gilder, several years later, began building his family’s holdings in farmland in and around Fowlerville.

In addition to automobiles, John Dodge also had an interest in agriculture. He and his wife, Matilda, began with 320 acres in Rochester, naming it Meadow Brook. Eventually, they would have nine farms.

Both John and Horace Dodge died in 1920 from the Spanish flu, a pandemic often mentioned in these days of COVID-19. Matilda raised their three children and three from John’s first marriage while also managing their enterprises. In 1925, she married Alfred Wilson, a lumber broker.

By World War II, the Rochester farm, with up to 40 employees, numbered 2,600 acres. In 1957, Alfred and Matilda generously donated the Rochester property to Michigan State University, which would create Oakland College, later renamed Oakland University.

With the gifting of the Rochester property, Matilda needed new stables for her herd of 70 registered, champion-bloodline Belgian horses. Property was purchased at Fowlerville, and in keeping with the Dodge reputation for excellence, the stables would be without equal. Construction on a new barn began in 1960 with the horses moved later that year. The Fowlerville site spanned 585 acres.

The head of the 10,000-square-foot barn’s “T” parallels a grand circle drive where visitors were greeted in a small foyer and could view awards earned by the horses. An oak staircase to the right of the room led to an upstairs apartment facing the driveway with balconies on either side from which Matilda could watch her horses graze in the pastures to the sides and rear of the barn.

The adjoining stem of the “T” featured 25 large box stalls for the most prized of the tall, powerful, majestic horses. Harnesses valued at $1,000 each were stored in climate-controlled cases to protect their chrome, brass and leather fittings. In earlier days, the horses had been bred for farming and use in the timber industry, but by the 1960s, the focus was on their appeal for advertising and competition.

In addition, two homes were built at the new Meadow Brook, one on either side of the driveway. Farm manager Harold Clark and his wife lived in one. Assistants Edwin and Hubert Frietag occupied the other. In addition to the horses, the men were responsible for 350 black Angus cattle. A truck garage, a blacksmith shop and a colt barn completed the facilities.

While on a trip to Belgium in 1967 to consider new stock for her line, Matilda Dodge-Wilson died of a heart attack at age 83. In 1969, the Fowlerville Meadow Brook was sold to William Britten of Williamston, president of another empire known as Mahogany Farms with divisions in seven states.

The big white barn had a new role to fill, this time as headquarters for a beef operation more familiarly known as Premier Beef. And as it was for the horses, all hay, corn and oats were on-site.

The barn’s hayloft became a long, carpeted corridor lined with offices, at the end of which is a large conference room for presentations and meetings. The box stalls for horses became show stalls for cattle as buyers came from all over the world to purchase Premier stock.

Meanwhile, the Van Gilder family continued farming literally “all around” for a total of some 8,000 acres in production, of which the family today owns about 6,000.

Like any business, Mahogany Farms changed as business conditions changed, and in 1977, the Fowlerville portion of the enterprise went up for sale. The Van Gilders purchased 600 acres while Rex Materials, a producer of high-temperature insulation, bought the 60-acre island and buildings, adding a manufacturing area with production ovens at the back of the barn while using its lower level for storage.

The hayloft continued as office space for Rex Materials' corporate headquarters. The Van Gilders leased tillable acres from the company.

But once again things changed, and in 2016, Rex Materials chose to move manufacturing to Virginia and Kansas — and their research and development arm just down the road to Howell.

“We really wanted this piece of property,” says Nancy Van Gilder, an energetic dynamo with sharp business sense. "We had acreage all around it, and Dad was willing to sell some of that to get this remaining piece. At age 86, he was still the decision-maker and remained so to the time of his death, just two days after his 90th birthday.”

Nancy, whose welcoming warmth is reminiscent of what has been written about Matilda Dodge-Wilson, adds, “Dad’s final push was to get good roofs on everything. He took care of things. He made sure of that.” His funeral was held on the lawn near the big white barn he was proud to own. Nancy’s mother, Pat, died in April 2020.

Things have not changed dramatically in the big white barn except that the stalls are gone and different forms of horsepower have taken their place.

A draft horse in a tiestall has been replaced by an electric car plugged into a charger. A shiny motorcycle draped with a dust cover stands where a gleaming stallion might have once been protected by a blanket. The chrome of harnesses is the chrome of a custom-painted dune buggy.

Offices remain on either side of the former haymow, where family members handle various roles in purchasing, marketing, farm management and more. And where bales of hay coming rapidly off an elevator once gave any farmhand a good workout, this haymow now includes a fitness center.

The barn also provides plenty of storage space for inventory that will be sold at White Barn Designs in Fowlerville, a gift and home decorating store named for the barn and owned by a family member. And it is the perfect site for an annual dinner hosted by the Van Gilders for their landlords and neighbors, much as Matilda Dodge-Wilson did for her business colleagues and friends many years earlier.

Rick Van Gilder and his wife, Terry, live in the apartment once occupied by Matilda Dodge-Wilson. They enjoy the view from the balconies, and while it may not include Belgian horses or Premier beef cattle, it is an ocean of fields and farms. And in the words of poet Carl Sandburg, “The barn was a witness, stood and saw it all.”