The East LeRoy structure was built in 1877; the current owner bought it in 1968. 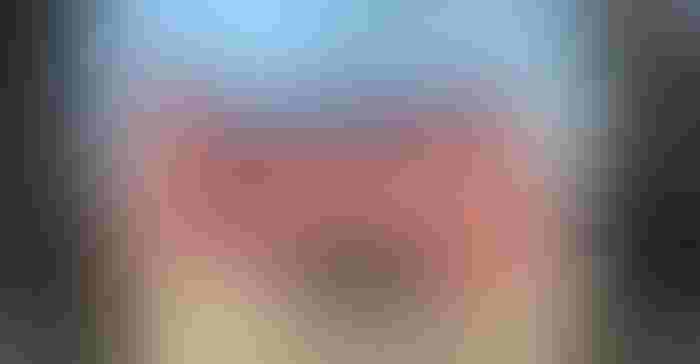 It is easy to tell when someone is fond of someone or something, especially when, to borrow an old expression, it is “written all over his face.”

Such was the case the day my husband and I stopped at the East Leroy farm of Shirley and Robert Hibbard on H Drive South to inquire about their barn and attention-grabbing wood-stave silo, a photographer’s delight.

“Oh, you want to know about my barn!” Robert said with a broad smile, as he brought his golf cart to a stop near their 1854 farmhouse, after a trip across a sloping field behind the barn. “That barn is worth more to me than the house. It is. Yes, it is.”

Prominent on the side of the 30-by-40-foot barn paralleling H Drive South are the words, 1877 Joppa, a Hebrew word meaning “beautiful,” and while the barn and silo are beautiful, the word was put there because the Hibbards live in what is known as the Joppa area.

Originally, Joppa was the name of an ancient seaport on the coast of Palestine, now known as Jaffa. Later, it was the name of a British colonial settlement in Maryland.  The local community is part of Leroy Township, established in 1837, and in all likelihood, settlers found the area quite beautiful.

The Hibbards have the original abstract, now very fragile and yellowed, going back to 1836 when Edwin M. Clapp was the first in a long list of previous owners — Alexander Crocker, Darius Finch and Cassius Pearl among them.

The barn was built by Thomas Wilson in 1877, two years after he bought the property, but there would be still more names on the paperwork before the Hibbards would buy it in 1968 and put down roots.

Some inch-thick boards in the upper-level interior of the barn are 18 inches wide, with most of the boards comprising the original roof from 18 to about 22 inches in diameter.

“There used to be two barns and silos just like these just across the road,” Hibbard said as he treated us to a tour of the barn and surrounding area he and Shirley have called home since 1968. “They were built in 1877 just like this one. Lyle Isted lived there and farmed with a John Deere A, or maybe it was a B. Worked like a son-of-a-gun all his life. I hated to see those barns torn down — hated it. The staves from one of those silos were used on a house not far from here.”

The remaining of the three silos is about 40 feet high and about 12 feet in diameter. Robert says he is uncertain of the type of wood used to build it. Another silo near Battle Creek, when vines were removed and it was evaluated, proved to be cypress.

Robert, who at 89 is mostly retired after working for Grand Trunk Railroad for 42 years, at one time farmed nearly 400 acres in the area with his son Charles, one of the Hibbards’ five children. He and Shirley bought their first 160 acres with the house and barn and another 160 acres in 1978.  “It’s still farmed,” he says. “Shirley and I work as a team. We love this place. Just love it.”

Shirley, who speaks quietly and smiles softly, murmurs agreement. The couple also milked about a dozen cows for several years. The barn’s fieldstone basement still contains some of the old stanchions and gutters. “We had the whole ball of wax!” Robert laughs. “We stopped milking cows in 1992, the same year I retired from the railroad.  I really retired!”

He points to hooks firmly affixed to the barn’s sliding doors facing the road. “See those? That’s where I hang an American flag every year. I’m a former military guy. I hang a flag on my barn.”

Robert is almost giddy with delight, showing off the cement floor he recently poured in the barn’s upper level built into the hill, a floor bearing the signature of a squirrel that tiptoed across its surface as the cement cured.

“This was just dirt and now we can use it better,” he says. “I would love to have a square dance here. Just look at this floor!”

The Hibbards have undertaken several other projects to keep the 140-plus-year-old barn and silo standing, including a new metal roof. The silo has been reinforced inside with cross-bracing, although it needs additional work particularly around the base. Robert plans to have the barn repainted this year. “I’ll have boards nailed and everything checked,” he says.

The barn on the main farm isn’t the only barn that Hibbard has given time and attention. Before trees leaf out for the season, another red barn is visible across the fields on the second farm he bought on 4 Mile Road. That barn had a large hole in the roof and was destined to fall until they made the decision to put about $12,000 into it a few years ago. “That barn was in bad shape. Bad, bad shape,” Robert states.

Arnett, who writes from Battle Creek, is a co-founder of the Barn Believers Community Project Fund held by the Battle Creek Community Foundation and is eager to learn more from barn owners across the state — and about barns they love and how they use them.  Reach her at [email protected].