&bull; The decision to apply supplemental nitrogen to make up for losses from leaching &mdash; and how much to apply &mdash; is one of the most difficult and risky tasks in tobacco production. 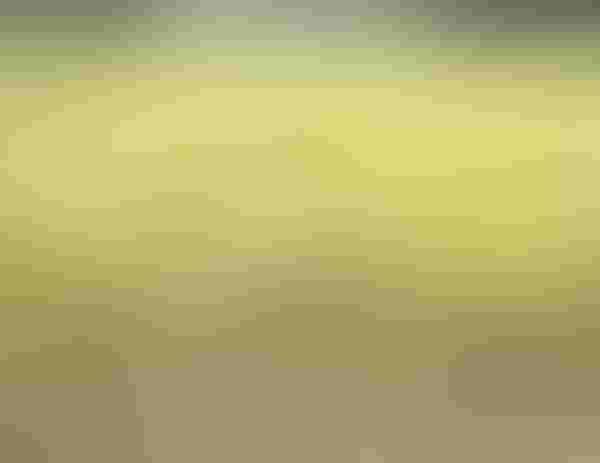 <p> THIS FIELD near Broadway, N.C., received heavy rains that leached out fertilizer. But the grower elected not to add any supplemental nitrogen. The result? A washed-out plant that was ready for final harvest when this picture was taken on Aug. 7.</p>

The decision to apply supplemental nitrogen to make up for losses from leaching — and how much to apply — is one of the most difficult and risky tasks in tobacco production.

But most growers this year, when there was so much leaching rain, had no choice but to make adjustments at some rate.

“It helped a lot,” he said in a September interview. “I wouldn’t have had anything left in the field now if I hadn't applied it.”

Pair used mostly granular nitrogen which he applied twice over-the-top. He used a truck supplied by his fertilizer company.

“We got good results,” he said. “The tobacco turned green again and the top of the stalk filled out.”

Harvest usually goes on until mid-October on Pair’s farm, which is near Raleigh. “But this year we will probably finish in mid-September,” he said.

The central portion of the Kentucky Bluegrass experienced similar conditions thanks to all the rain, and many burley growers elected to supplement their fertilization programs, said Roger Quarles a grower from Georgetown.

On one 15-acre field, Quarles sprayed liquid nitrogen underneath the leaves and directly onto the soil using a high clearance sprayer with drop nozzles.

"It was a lot of extra work. I had to re-rig the sprayer. But the leaf colored back up afterward," he said.

He thinks burley fields may not actually have lost as much nitrogen as it initially appeared.

“I think the roots suffocated immediately after the rains. The crop looked bad. But the roots started growing again two to three weeks later, and it began looking better," said Quarles.

But the leaf in the Bluegrass was generally on the thin side, he said, and perhaps 10 percent of poundage in the Bluegrass was lost due to rainfall. "But that is much improved from what we expected a month ago," he said. "If we can just get it into the barn, I think we will be all right."

Not all growers were assured of making it. “Some larger growers were way behind schedule and had been since they were forced to start transplanting late because of the rains,” said Quarles.

“If conditions don’t improve, these farmers may run out of time to get their tobacco cut and hung.”

But he feels there are two application lessons to be learned from this crop:

• Applying liquid nitrogen directly on the soil with a drop line gives a quicker response than if you apply it by running it down the stalk.

• There is a definite benefit to applying nitrogen in multiple small applications rather than one big one. If nothing else, it gives you the flexibility of not making later applications if you don't need them.

Fisher hopes, however, that one old lesson won't be forgotten. "Don't go into the 2014 season with the idea of increasing your pre-plant nitrogen application,” he said.

“We are just as likely — maybe more likely — to have a dry summer rather than a wet one, and you don't want excess nitrogen to turn your tobacco green late in the season.”

Curing was a problem with this wet crop, and Pair was glad he had an automated curing control system.

He got a Cureco system five years ago, and he said it paid for itself in two years. “We have gotten increased quality since we started using it and a more uniform cure,” he said.

“It takes a lot less of my time and it seems to save about 12 hours a barn in curing time.”

The amount of fuel savings associated with any automatic damper control will depend on how well a grower is currently managing the ventilation process.

Automatic control systems can also monitor the dry-bulb and wet-bulb temperatures and transmit this information electronically to a central location, such as an office or home, he said.

Burley growers have fewer options to make curing more efficient, but Stanley Holloway, Yancey County (N.C.) Extension agent, said that considering the growing conditions, farmers in the western part of the state will look at wider spacing of their sticks on the tier rails.

“This will allow more air movement,” he said.

In Kentucky, Extension Tobacco Specialist Bob Pearce, reminded growers that in conventional burley barns, all available space should be uniformly filled. “Air does not circulate well through tobacco in partially filled barns,” he said.