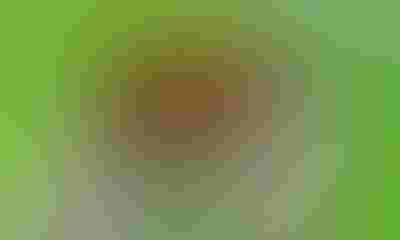 The monarch butterfly population has been declining in the United States since the late 1990s.

"One of the many factors contributing to this decline is the shrinking number of milkweed plants," says Luke Bozeman who is group leader of field biology for BASF in Durham, N.C. "Milkweed is a critical component in the monarchs’ reproduction cycle."

Monarchs fly north from central Mexico in spring, landing in central and eastern parts of the United States. During this migration, adult female monarchs lay eggs only on milkweed. When the eggs hatch the larvae feed on milkweed leaves. Major stretches of farmland lie within the monarchs’ migration path. By allowing milkweed species to grow on land not reserved for crops, farmers can play a key role in helping restore the monarch population.

Bozeman says to increase the amount of milkweed available for monarchs, farmers should consider growing milkweed on their farms.

"In its simplest terms we are talking about growing milkweed in non-crop areas including fence rows, rights of way, CRP lands, grassed waterways and field margins," he says. "In many of these places there are probably already native species of milkweed that they are probably growing and mowing. These areas don't need to be managed like a lawn -- they can have flowers and milkweed growing on them. You can mow these areas but delay mowing until later in summer, around the end of August, after the monarchs migrate south."

Biologists at BASF are monitoring milkweed planted on farms in non-crop areas.

He admits it may seem a bit strange to plant what has long been considered a weed on your farm.

"Keep in mind, when milkweed is growing in your soybeans we can control it because it is a weed. When it is growing outside a field, milkweed is considered a plant not a weed," Bozeman explains.

Besides a reduction in milkweed, Bozeman believes there are other factors contributing to the decline in the monarch population.

"The availability of milkweed is certainly contributing to the decline in the monarch population," he says.  "But I don't think it is the only factor. Another factor is a lack of forage diversity. The adults need to eat nectar from a wide variety of plants and flowers, not just milkweed. And there has been a lot less flowers available to them."

Bozeman says the prolonged drought in Texas that began about a decade ago and persisted until 2013, may have also contributed to a decline in the monarch population since the butterflies pass through Texas in late summer on their migration to Mexico and again during spring when they fly north.

"Texas was in a long-term drought until two or three years ago," he notes. "I think that was also a factor in the decline in monarch populations over the past decade."

As more farmers start growing milkweed and flowers on their farms, Bozeman says he is optimistic about the monarch population making a comeback in the near future.

"They measure the land area where monarchs overwinter in central Mexico," he says. "In the past couple of years, there has been an uptick in the number of monarchs overwintering there so that is a good sign the population is not crashing."

With a little help from farmers, Bozeman believes the monarch populations will continue to improve.

"I think growers understand this is an opportunity for them to be proactive and do something for the betterment of the environment and a species."