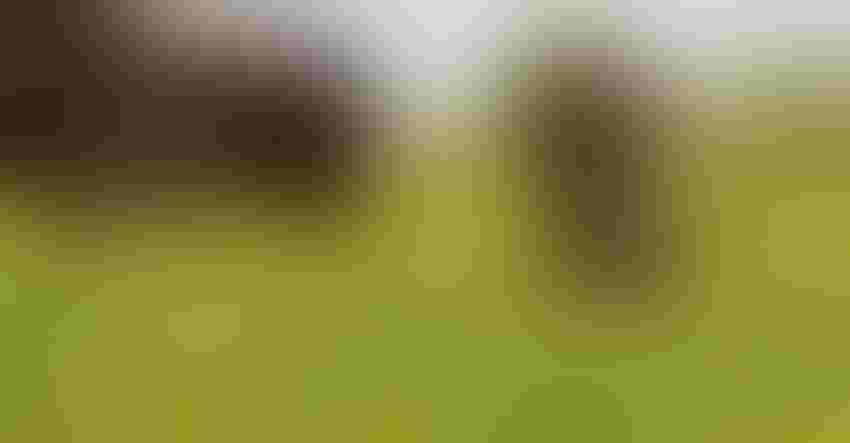 Weather has been erratic for much of the late winter, which has impacted cool-season forage growth, she said. Cooler temperatures coupled with overcast days may have prevented typical spring forage flushes for many producers.

She has been receiving producer calls about management options to maximize remaining cool-season grasses and assist Bermuda grass emergence.

“Cool-season forages were producing a little later than usual this year, and there is still a lot of ryegrass in pastures,” she said. “Producers are trying to figure out if they should graze those fields out or cut them for hay.”

Corriher-Olson recommends hay and forage producers focus on reducing competition for warm-season forages like Bermuda grass. They may want to cut and store ryegrass or other cool-season forages.

“We’re coming off a pretty good hay production year,” she said. “But there are still areas of the state where producers fed much more hay this winter because of the erratic weather and poor cool-season forage growth. So, they may be anxious and want to restock some bales in case we experience drought going into summer.”

Corriher-Olson said moisture levels are good for much of the state going into hay production season. Most of the state has adequate to good moisture. A few areas in South Texas continue to experience drought according to the drought monitor.

“You want Bermuda grass to access that moisture,” she said. “We know that it’s usually drier in June, July and August, so whatever we can do now to reduce competition for subsoil moisture could help later in the season.”

Producers should hold off on fertilizer applications until temperatures consistently support warm-season grass growth, she said.

“You don’t want to apply fertilizer early because it will be utilized by winter weeds and cool-season grasses,” she said.

Corriher-Olson said the transition period between cool-season and warm-season grasses is a good time to prepare equipment, buy management products and plan ahead.

She has already received a few calls regarding armyworms in winter forages and in Bermuda grass that had broken dormancy.

“These reports are a good reminder that producers need to be scouting fields when weather is cool and wet,” she said. “It is especially important to protect high-value fields and pastures.”

Producers should have pesticides ready to apply, and equipment should be calibrated for spraying, she said.

Warm-season weeds haven’t emerged yet, but producers can prepare to address them, Corriher-Olson said. Producers should be prepared to treat areas in pastures where weeds were problematic the previous year.

“They should be planning for herbicide and pesticide applications,” she said. “That includes buying products and calibrating equipment to be ahead of the game. The last thing you want to be doing is looking for a part or repairing equipment or ordering spray treatment products when you need to be in the pasture addressing the problem.”

Rains ranged from 0.75-5 inches over a good portion of the reporting area. Most areas received amounts on the low end of that range. Soil moisture remained below adequate for crop demands in most fields. Drought-stressed corn fields should improve following recent rainfall. Some dry-planted cotton has yet to germinate. Approximately 50% of rice fields were planted. Moisture-stressed rangelands and pastures were expected to improve. Livestock were finding enough green forage to hold their condition. Cattle inventories were high, and prices went down. The cull-cow market fell quite a bit, and the calf market softened as well. Nursing calves were starting to lose condition, and cows could be delayed in breeding.

Rain was received across the district and delayed fieldwork in some areas. Warm-season forages were starting to green up due to rain. Cattle were feeding on green grass and not much hay. Pasture and rangeland conditions were good. Subsoil and topsoil conditions were adequate. Livestock were in good condition. Cattle prices dropped due to COVID-19. Henderson County reported problems with armyworms, and wild pig activity and damage were widespread.

Wheat was starting to head out in a few early planted fields. Oats were just starting to emerge in fields across the district. Farmers were able to work in fields all week. Producers were busy spraying wheat fields and preparing to plant cotton in May. Temperatures dipped to 31 degrees causing a slight frost. Cattle were in good condition.

Topsoil moisture levels were adequate to surplus. Sporadic rains across the district made it difficult for some producers to get into fields. Subsequently, ryegrass pastures were growing rapidly. Wet conditions were causing concerns about foliar disease on wheat. Some corn fields may need to be replanted. Wet fields may delay some corn plantings. Bad weather and COVID-19 caused low livestock numbers at auctions.

Temperature highs were in the upper-80s with lows in the mid-40s. Rainfall averaged between trace amounts and 2 inches. Producers reported wind gusts up to 40 mph. Pre-irrigation for cotton and row crops continued, and cotton producers were preparing seed beds. Winter wheat made a good stand and started heading out. Many wheat fields were cut and ready to bale.

Some wheat fields remained as a cover crop or as a buffer for cotton. Alfalfa producers were preparing fields for cutting. Alfalfa weevils hit some fields hard. Producers planted fields of chili peppers. Pecan orchards received irrigation. Pecan and mesquite trees have broken bud and were starting to green up. Livestock had adequate forages on rangelands. Livestock and grazing conditions were fair. Lambing and kidding finished up. Producers took lambs to market, and goats should go to market soon.

Soil moisture was good in most areas. Brazos County reported heavy rains across the county. Jefferson County reported the ground had dried out. Rice was planted, but those rice fields needed rain. Rangeland and pasture conditions ranged from excellent to very poor. Grass was coming on strong in areas with good moisture.

The district reported mild weather conditions with very short to adequate soil moisture levels, but light scattered showers fell in some areas. Starr County reported up to 1 inch of scattered rain. Willacy County reported 2.5-3 inches of rain fell over most of the county. Producers were purchasing fertilizer. Strawberry growers were harvesting and selling their products. Potato fields were flowering. Wheat and oat fields that survived drought conditions have headed. Cattle grazed out some wheat and oat fields. Producers planted corn, and many corn fields emerged.

Corn, sorghum and cotton made good progress after irrigation applications, and pasture and rangeland conditions continued to improve from rainfall. Irrigated Coastal Bermuda grass fields were already producing bales in some areas. Vegetable crops were growing and in good condition. Cabbage harvest was active. There were some reports of supplemental feeding for livestock. Subsequently, producers in drier areas continued to cull herds, provide supplemental feed and haul water. Hay bales were selling for $100 in Kleberg and Kennedy counties and $110 per round bale in Duval County. Farmers were dry planting fields as forecasts called for rain and season deadlines approached. Deer breeders were providing protein, cottonseed and corn for wildlife. Some ranchers were providing water for wildlife.