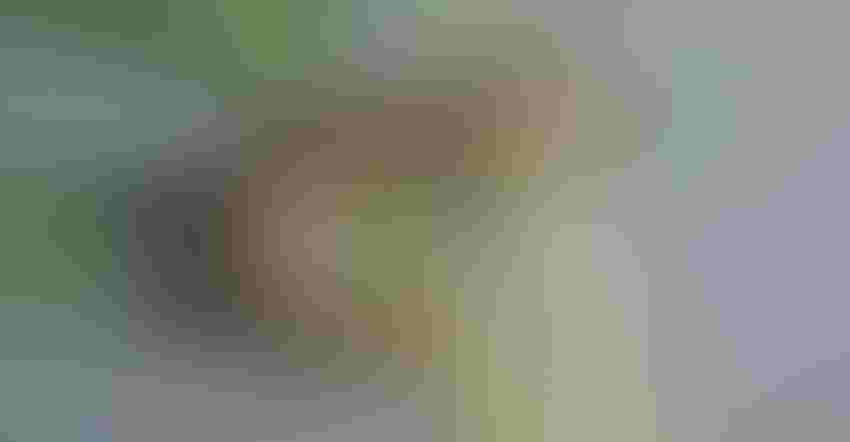 Fall armyworms can be distinguished by the upside-down, cream-colored “Y” shape on its head capsule. In large numbers, these insects can be devastating to crops, hayfields and pastures.Bart Drees, Texas A&M AgriLife Extension Service photo

Ashley Tessnow, a doctoral candidate in the Texas A&M College of Agriculture and Life Sciences Department of Horticultural Sciences, said armyworms have long been a pest that agriculture producers throughout the central U.S have tried to manage. But despite the long-standing battle against fall armyworms, there is still a lot experts do not understand about the pest.

“There have been increased occurrences of major armyworm outbreaks over the past few years,” she said. “And armyworms have also made it into news because they were introduced to Africa, Asia and Australia. With this increased attention, we have come to realize how little we actually know about them.”

Tessnow’s research, under the advisement of professor Greg Sword, Texas A&M College of Agriculture and Life Sciences Department of Entomology, will focus on identifying genomic differences in fall armyworm populations in Texas and beyond, which she hopes will ultimately help producers combat the pest more effectively and efficiently. Her research was awarded a $51,574 grant from U.S. Department of Agriculture National Institute of Food and Agriculture.

Fall armyworms are green, brown or black in color and can be identified by the white inverted Y on their head. They can grow up to 1 inch in length when mature. The pest got its name because they appear to march across crop and hay fields like a military formation, consuming everything in their path.

The pest overwinters in South Texas and migrates north through the central U.S. and into Canada annually. Fall armyworms migrate as moths, but it’s the caterpillars that are destructive to a wide range of crops, including corn, sorghum and forage grasses.

Tessnow is particularly interested in studying two distinct strains of fall armyworms as they migrate northward throughout annual growing seasons. These strains of fall armyworms are identical but have genetic differences that make them inherently different pests. The research will look at the C-strain, originally named for its prevalence in corn fields, and the R-strain, named for its identification in rice fields, but also known for consuming small grasses like Bermuda grass.

These fall armyworm strains are each a unique agricultural pest that exhibit different crop preferences and respond differently to insecticides, she said. Although these two strains are distinct, they can occasionally hybridize creating a third “unknown” type of pest.

This project will develop new genomic tools to effectively control armyworm infestations based on the strains present, Tessnow said.

The goal of the research is to use next-generation sequencing methods to characterize the populations of these two strains in the central U.S., she said. This will provide insights about which fall armyworm pests are present across different regions of Texas and the U.S., and how frequently these strains hybridize in each region.

“We’ll be looking at genetic differences between these strains and any instances of hybridization as the moths migrate from south to north every year,” she said. “We have preliminary data that shows the same populations of armyworms can be found from Weslaco to Minnesota, but we want to study the genomic structure and how these strains differ.”

Tessnow said the research also aims to develop new diagnostic tools to differentiate between the strains. These tools could help identify novel approaches to effectively manage each strain separately or together in fields and/or hybrid strains that emerge during the annual migration.

“When collecting moths in corn and sorghum fields, which are expected to be primarily comprised of C-strain fall armyworms, we’ve found there is actually an even mix of both strains,” she said. “So, we want to understand the relationship between strains, what is causing them to be genetically distinct, and look for patterns of hybridization. We know hybridization occurs between strains at relatively low rates, but we don’t know how this may affect the fall armyworm’s susceptibility to insecticides, including Bt crops.”

There are two objectives for Tessnow’s research.

Fall armyworm moth traps have been placed in corn or sorghum fields at five Texas locations including Weslaco, Corpus Christi, College Station and Lubbock, and Rosemount, Minnesota. At least 25 moth samples from each location will be collected at several times throughout the year.

DNA from 20 individuals per sampling point will be sent to the Texas A&M Genomics and Bioinformatics Service for DNA sequencing, she said. The DNA sequence data will be uploaded into the Texas A&M High Performance Research Computing Clusters, and bioinformatics analyses will be used to differentiate the C-strain, the R-strain and any inter-strain hybrids.

Tessnow will also identify any subpopulations that occur between different locations within the strains. The sequence data will be made public for use by other researchers upon the project’s completion.

The second objective is to develop a polymerase chain reaction-based genotyping assay that would allow producers or crop consultants to differentiate between the two fall armyworm strains quickly and reliably during routine scouting.

“We’re most interested in the prevalence of these two strains in the field and what crops they prefer,” she said. “But I am also curious how the misconception that all fall armyworms in a field are the same strain might be affecting mitigation programs for this pest. Knowing which armyworm strain we’re dealing with, and how common it is to have both strains present at specific locations, could impact the effectiveness of treating those crops for fall armyworms.”