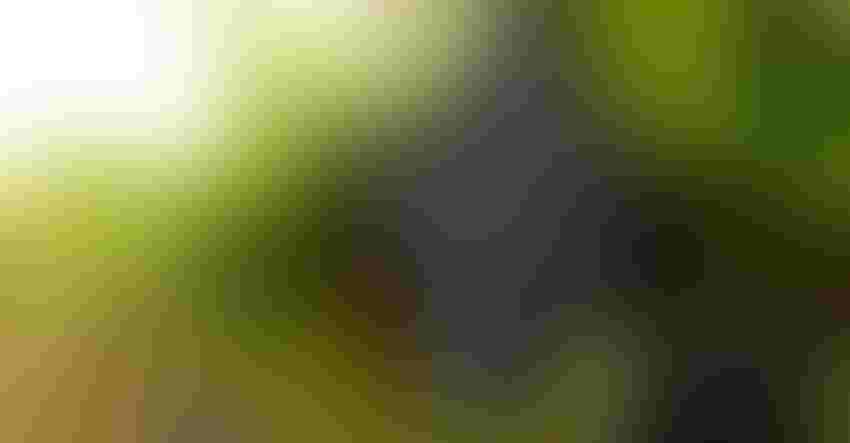 Severe drought and high temperatures led to losses in Arkansas' specialty crops in 2000.Fred Miller, U of A System Division of Agriculture

Severe drought and some of the highest temperatures seen in years caused many Arkansas fruit and nut crops to suffer yield losses in 2022.

July and August had less than average rainfall throughout the state, resulting in severe or moderate drought conditions for much of the state, according to the United States Drought Monitor. The National Weather Service reported that July was one of the hottest and driest months on record, with several record high temperatures recorded. Little Rock experienced its sixth hottest July since records began in 1879.

Blackberries were hit hard by the lack of water and hotter temperatures, said Sherri Sanders, White County agricultural extension agent for the University of Arkansas System Division of Agriculture.

“My growers saw a 50% decrease in their yields in some cases,” she said. “Dry conditions also caused a spider mite breakout in blackberry plantings.”

Mite feeding can reduce plant vigor and might cause leaves to turn brown and drop, which in turn reduces overall crop yield, Sanders said.

Along with the drought, pecans faced a fall freeze event that was detrimental for shuck opening.

“Pecans are dependent on water, so the shuck opening was delayed because of the drought,” Sanders said. “The freeze we had in October caused damage to the nuts, which decreased their quality.”

“High temperatures in early June reduced fruit set in the top of the plants,” he said. “Later in June, daily temperatures were excessive and began to take its toll on the plants. Producers were challenged to rotate irrigation application to meet the crop needs, but producers were harvesting good volume and quality fruit.”

The high-quality fruit and volume did not last after downpours in July, he said.

“Unexpected heavy rain — up to six inches in some places — in the first part of July, followed by excessive hot, dry weather, reduced fruit quality to the point that harvesting was stopped earlier than usual,” Gavin said. “During harvest the demand for Arkansas tomatoes remained strong, resulting in higher-than-normal average prices.”

The strawberry crop suffered due to weather, and the season was shorter than normal for producers, said Matthew Davis, Jackson County agricultural extension agent for the Division of Agriculture.

One fruit that had no issue surviving the drought of late summer was the muscadine.

“This is a hardy fruit that doesn’t come into harvest until later in the fall,” Sanders said. “It missed most of the heat and dryness that the other fruits and crops had to experience.”

Muscadines are an up-and-coming fruit in the state, gaining popularity with winemakers and restaurants. They are popular for their toughness and favor with the state’s climate, Sanders said.

Amanda McWhirt, associate professor of horticulture and fruit and vegetable extension specialist, said the grape crop for 2022 was improved compared to last year.

“The 2022 season was a good year for grape harvests following the 2021 season that saw reduced yields due to the February ’21 freeze,” she said. “The dry summer conditions limited disease for many grape growers.”

“The 2022 season was a good year for peaches in the state with fewer impacts from spring freezes than in previous years,” she said. “The dry conditions limited disease but also resulted in some delays in crop ripening in some areas.”

“The berries were sourced from Ritter Farms, here in White County to brew a blackberry-based beer,” Sanders said. “This is a great opportunity for our blackberry producers because it gives them another value-added option for their product. There are also restaurants featuring Arkansas grown blackberries on their menus.”

“The map shows numbers for squash vine borer, cabbage looper and tomato fruitworm moth for 2022,” Sanders said. “The map will be updated at the beginning of the 2023 growing season, and it is sure to be a great tool for producers next year.”

McWhirt concluded a three-year study to provide updated recommendations for fall strawberry establishment in the Natural State. McWhirt found that planting strawberry plants too late in the fall reduced yield by 15% to 35%, depending on variety and test year.

“We used moisture sensors to predict how much irrigation was needed based on crop load and to schedule the next predicted irrigation time,” Sanders said. “We also worked with growers to rotate modes of action in insecticide and fungicide application to lessen the chances of resistance.”

Renee Threlfall, research scientist of enology and viticulture with the food science department, shared research measuring the volatile compounds in muscadines to determine what gives them their unique aroma and flavor. Threlfall also characterized the post-harvest shelf life of muscadines.

Margaret Worthington, assistant professor of fruit breeding and genetics for the experiment station, provided an update on the Arkansas muscadine breeding program at the event. She said that two new Arkansas-bred muscadine varieties are expected to be released to the public in the fall of 2023. A seedless muscadine variety is also in the works, she said.