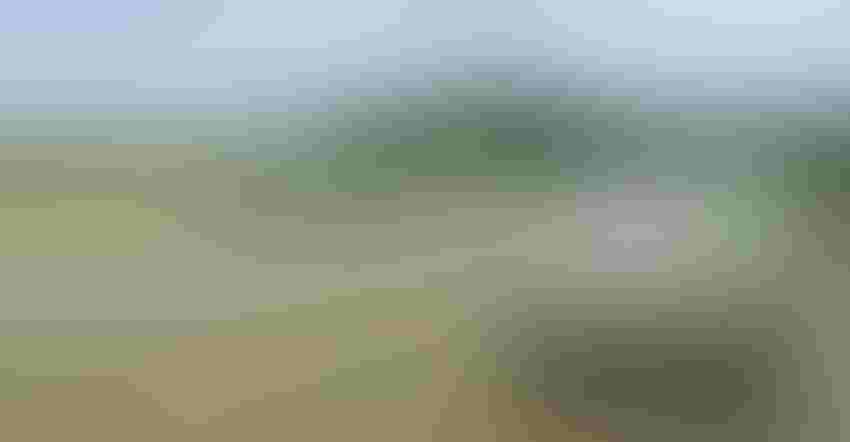 Growing conditions during the 2020 hay season were not ideal for most producers in East and Central Texas.Texas A&M AgriLife photo by Adam Russell

A bevy of issues amounted to below-average yields for most hay producers in East and Central Texas, according to Texas A&M AgriLife Extension Service experts.

Vanessa Corriher-Olson, AgriLife Extension forage specialist, Overton, said many hay producers missed out on multiple cuttings due to weather conditions or lower yields due to pasture conditions or pest infestations.

“I think we’re a little lower on production than we’re used to,” she said. “A lot of hay producers in East Texas have had production issues this season.”

Corriher-Olson said the hay season started later than usual due to cooler temperatures in May, which delayed Bermuda grass growth almost a month. AgriLife Extension recommends cutting Bermuda grass every 21-28 days, which is typically the peak quality for fertilized fields that receive average rains.

“This year, many producers didn’t get their first cutting until June,” she said. “I think there was an evening in May where the temperatures dipped into the 30s, and Bermuda grass doesn’t produce significant growth until nighttime temperatures are consistently 60 degrees for several days.”

Then a summer dry spell set in, she said.

“There has been some intermittent, scattered rain, but we’ve definitely had less rainfall than in recent years,” she said. “Most producers got three cuttings, but many who only got two may not get a third if we don’t get good rains from now until November. Even then, pasture production will depend on fertilizer application, and producers are hesitant to invest time and money unless they see a high probability of rain in the forecast.”

Expected rains from Hurricane Laura did not materialize for much of the state, Corriher-Olson said. She expected, given the extended dry conditions, armyworm infestations could follow those storms. So far, most armyworm activity has been sporadic, and mass pasture casualties have been avoided.

“Rains and cooler temperatures could change things quickly,” she said. “And it could be critical for any last cutting to be aware of conditions that might bring armyworms out.”

Due COVID-19 restrictions, coCorriher-Olson said she doesn’t have a good estimate for where winter hay stocks sit for most East Texas producers.

“Hopefully, cattle producers who haven’t hit their typical bale counts are looking at planting winter forages this fall,” she said.

There are a few options for pastures if they miss rains and potential yields aren’t enough to warrant baling, Corriher-Olson said. Producers can graze it out or leave it standing.

“Leaving it standing is a good thing because you haven’t depleted the root structure,” she said. “That will help carry the forage going into next season, and it provides some competition against winter weeds. Excess thatch or stubble height can be handled with fire or shredding in January or early February while grasses are still dormant.”

Conditions were too wet early in the season for producers to clear ryegrass, McLellan said. Quality in those pastures was not great by the time producers made the first cutting.

Wet conditions cost producers one cutting, and a lack of rain will likely mean a poor final cutting, he said.

“Producers got two cuttings, maybe three in some cases,” McLellan said. “Irrigated pastures got four to five quality cuttings, but weather conditions and timing of fertilization and spraying weeds were big factors for success in June and July.”

Conditions south, north and west of McClennan County were even drier, he said.

“Usually north of us picks up more lines of storms and is wetter, but that didn’t happen this year,” McLellan said. “And as you go west it changes quickly. Even western parts of McClennan County received 10 to 15 inches less than my pastures did. There was a pretty distinct fault line in rain differential.”

“Some areas did better than others,” he said. “I’ve got more hay than ever, but I could’ve produced more without weather delays and not getting fertilizer and herbicides applied when they needed to be.”

Conditions were extremely dry throughout most counties. Triple-digit temperatures increased evapotranspiration in all plant life. Trees were stressed, and any plant not being watered suffered. Some areas received some rainfall, but not enough to turn conditions around. Williamson County reported trace amounts up to 1.5 inches of rain, but most areas received only light rainfall. Irrigated crops looked good. Most native dryland pecan orchards were dropping nuts due to drought stress. Proper and timely management of some pastures allowed them to stay productive despite the heat. Some hay fields greened up, but growth was slow. Cotton was being defoliated, and bolls were open for harvest. Some cotton fields were being harvested, and average yields were expected. Stock tanks were getting low. Corn and sorghum harvests were nearly completed. Some farmers were plowing corn fields. Nearly all counties reported very short soil moisture and poor overall rangeland and pasture conditions. Livestock conditions were fair to poor.

Conditions were favorable for producers as most areas received beneficial rains. Cotton continued to progress in fair to good condition and began setting bolls. Wheat producers continued preparing fields for planting. Pasture and rangelands improved with recent moisture.  Cattle were being supplemented with minerals and hay in areas where forages were in short supply.

Hot, dry and humid conditions continued. Fieldwork continued, mostly disking. Good crop production reports were received for all crops. Cotton yields were two to three bales per acre with some reports of four bales per acre. Most cotton acres were harvested, though a few fields had yet to be defoliated. Gin yards were filling rapidly. Rice harvest was nearing completion. Although hay pastures were parched, production continued with a second cutting, and some producers were fertilizing for a third cutting. Rangeland and pasture conditions continued to decline with hot and dry weather. Livestock were in fair to good condition in most areas.

Most of the district did not report rains from Hurricane Laura. Many areas were looking forward to relief from drought. Shelby County reported high winds and rain. Damage to their power grid caused a loss of power during and after the storm for hours and days for some. Sabine County reported as much as 6 inches of rain. They also had destructive winds that caused damage to many barns. Pond levels were low and showing signs of low-quality water. Pasture and rangeland conditions were good overall. Subsoil and topsoil conditions were adequate. Hay and vegetable production slowed. Livestock were fair to good. Horn flies were very active. There were reports of armyworms and Bermuda grass stem maggots. Wild pigs continued to damage pasture and hay meadows.

Dry conditions continued. Cotton finished setting bolls. Producers started to reduce irrigation as most plants were mature. Several producers were busy harvesting corn this past week. Sorghum is starting to color well. Pumpkins were doing well and continued to mature. Cattle were in good condition with supplemental feeding.

Topsoil moisture throughout the district ranged from very short to adequate. Temperatures were in the upper 90s with sporadic rain. Temperature highs were in the 80s a few days. Most areas received some rainfall from Hurricane Laura, with trace amounts to 2.5 inches reported. Corn was still being harvested but nearly complete. Soybeans that received rain were doing well. Soybeans and cotton in areas that missed rains were struggling. Livestock were in good condition. Spring-born calves were looking good as weaning season approaches. Summer pastures that received rainfall looked good, but drier areas were starting to show signs of drought. Armyworms continued to be a problem in some areas.

Daytime temperature highs reached beyond 100 degrees, with low temperatures in the mid-60s. Only trace amounts of rain were reported. Reservoirs were not being recharged, which could be devastating for irrigation during the next growing season. Dry conditions increased the threat and concern for large wildfires. Corn and sorghum harvests finished. Cotton bolls were opening at a relatively rapid pace. Irrigated cotton made a good stand and has had plenty of heat units. Dryland cotton that survived was burning up. Harvest should begin soon. Despite the dry conditions, cattle were still in good overall condition. A few producers were preparing to calve. Pecan orchards looked very good, although root knot nematodes were found in an orchard.

Conditions continued to be hot and dry. Dryland cotton was basically done, and irrigated fields were nearing the cutout stage. Grain sorghum and corn was harvested. Pastures were dry. Some livestock producers started selling calves and other livestock. Livestock were in fair condition.

Most people and producers were preparing for the hurricane. Rice producers harvested as fast as possible. Fortunately, the hurricane did not hit, and rice that was not harvested made it. The harvest was expected to continue as soon as possible. Grimes County remained dry and drought conditions increased. Rangeland and pasture ratings were excellent to very poor with fair being the most common rating. Soil moisture levels ranged from adequate to very short with short levels being most common.

High temperatures continued in the triple digits. Fire danger increased due to drought conditions. Kendall County reported water levels in streams, ponds and water wells were dropping. Pasture and rangeland conditions were declining with the lack of moisture. Corn and grain sorghum harvests were complete with reports of average to good yields. Cotton harvest began. Livestock were in fair to good shape with supplemental feeding. Caldwell County reported a stable cattle market with sheep and goat prices remaining the same. Fall shearing continued. Wildlife were in good condition.

Northern, eastern and western parts of the district reported hot conditions and short to very short soil moisture levels. Soil moisture levels were adequate to short in southern areas. Daytime temperatures reached 100 degrees or more most days. Grain sorghum and corn harvests were completed, and cotton harvest was underway. Atascosa County reported 15% of cotton was harvested and roughly 15% of fields defoliated. Most other counties reported cotton fields were being harvested, being defoliated or nearly mature. Many cotton fields damaged by Hurricane Hanna were being shredded and stalks were being pulled. Quality irrigated hay was cut and baled in Atascosa and Maverick counties. Oat producers with irrigation water were planting oats while dryland producers were waiting for some moisture. Seedbed preparation continued for spinach, cabbage and onion plantings. Strawberry producers were planting early varieties. All crops were being irrigated. Moisture levels for fall vegetables were being managed. Pasture and rangeland conditions ranged from good to poor, and while some continued to decline due to lack of moisture and hot temperatures, some were improving due to recent rains. Livestock in most areas required supplemental feed and water. Prickly pears were ripe and being cleared of thorns for livestock and wildlife. Ranchers were beginning to wean and sell spring calves, and whitetail bucks were finishing their antler growth cycle. Beef cattle conditions were good, but sale volumes were increasing as dry weather continued. Maverick County reported watermelon and cantaloupe harvest continued. Pecan orchards were in good condition and nut development was going well. Local ranchers were preparing for dove season. Hay producers made a second cutting as prices ranged from $50-$65 per round bale. Ranchers continued to stock up on bales due to conditions and in preparation for winter. Some sesame fields were being harvested, and some were being destroyed.