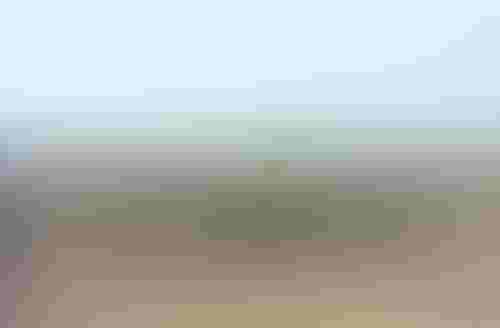 If you see yellow leaves, stunting, or midday wilting in your cornfields next summer, the problem could lie beneath the soil. Microscopic worms (or nematodes) could be the culprit. The only sure way to find out is to collect soil samples and send them to a lab for diagnosis (see "Sampling for nematodes"). Or you may use yield maps and field histories to identify and treat potential hot spots.

Corn nematodes weren’t a problem from the 1950s to the 1980s. Soil-applied insecticides were used and some of them had activity on nematodes. This changed in the 1990s with the advent of transgenic traits for in-plant control of pests. Soil-applied insecticide use dropped dramatically. In the meantime, nematodes have been largely ignored, reports Greg Tylka, plant pathologist, Iowa State University.

One reason for this is because yellow or stunted corn can be caused by other factors like insect pressures and soil compaction, according to Keith O’Bryan, agronomy research manager, Pioneer Hi-Bred.

Reports of nematode pressure across the Midwest were few in 2010. But there were some hot spots, primarily in the western Corn Belt’s sandy soils. Paul Vaculin, marketing manager, Amvac Chemical Corporation, says there also were hot spots in the sandy soils of central and southern Illinois and southern Indiana.

Agronomists in Pioneer’s Central Business Unit (Iowa and Missouri) pulled samples and developed maps from various nematode hot spots. They have established economic thresholds for treatment and are sharing information with growers.

Treatment options include Counter, the only granular formulation registered for nematode control, and seed treatments, such as Poncho/Votivo and Avicta Complete Corn.

Counter may be applied using Amvac’s SmartBox system, a closed application and handling system for insecticides and nematicides. Counter was changed to a 20G formulation in 2010 so that each fill covers one third more acres than in the past, Vaculin says. The system also may be used to apply Aztec from Bayer, Force from Syngenta, and Smart Choice from Amvac.

In grower fields and seed company trials in 2010, Poncho/Votivo-treated corn yielded 6 bu./acre more than seed treated with the 250 rate of Poncho 600 alone, according to Jennifer Riggs, product development manager, Bayer CropScience. The biological seed treatment was tested throughout the Corn Belt. In comparisons with Avicta Duo, Poncho/Votivo yielded 2 bu./acre, notes Riggs. Poncho 1250 and Votivo yielded 3 bu./acre more than the 1250 rate of Poncho 600, she adds.

Because visual symptoms of nematode damage are generally apparent, it may be cost-effective to use GPS technology to spot treat for the pest. Scott Monfort, Extension plant pathologist, University of Arkansas, says there is a relationship between nematode damage and soil type. He is using electrical soil conductivity mapping tools to detect soil texture variation.

The SmartBox can be used to automatically apply Counter to corn nematode hot spots using a GPS interface to turn the system on and off. Currently, it is compatible with the Mid-Tech Legacy 6000 GPS controller. Amvac is working to broaden compatibility between the SmartBox and other GPS systems, Vaculin says.

Using GPS and variable-rate technology could make sense because nematodes are relatively immobile and are fairly predictable in a field, Iowa State’s Tylka says. “If you can determine the location of the hot spots, it would make sense to spot treat,” he says.

University plant diagnostic and private labs can help determine the species of nematodes affecting your fields and provide a good idea of the pest populations you have.

Because of the dry weather in parts of the Midwest in 2010, nematodes may have moved deeper into the soil. This could make sampling a bit more difficult this year.

Sampling can generally be done at the V6 to V8 stage in the early corn-growing season, says Keith O’Bryan agronomy research manager, Pioneer Hi-Bred. If you are unable to sample fields, you can also use yield maps and field histories to identify and treat potential hot spots.