In areas where manure and litter are readily available, they can provide a way to meet higher phosphorus demands for wheat. 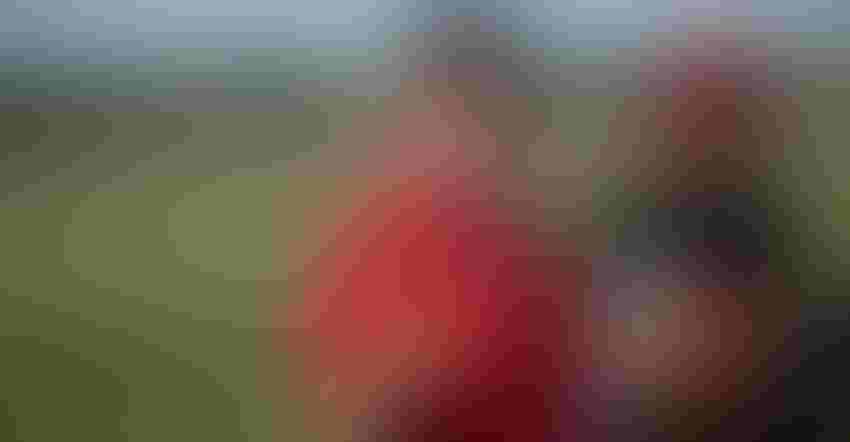 A WIN-WIN SITUATION: At a recent Winter Wheat Field Day near Hooper, Rick Koelsch (left), UNL biological systems engineering professor, discussed how manure can be a win-win for growers. As a strong source of phosphorus, he notes, it can be a good fit for winter wheat.

Historically, producers have looked at manure as waste to get rid of, but Rick Koelsch is encouraging growers to think about manure as a potential win-win situation. "We've talked too much about the negatives associated with manure," Koelsch, a University of Nebraska-Lincoln biological systems engineering professor, told growers at a recent Winter Wheat Field Day near Hooper. "There's an opportunity to win economically, and there's also an opportunity to win from an environmental standpoint."

That's true for winter wheat growers with an available source of manure or litter, who have an additional window to apply in late summer or early fall when there's a lower risk of compaction.

Manage phosphorus, nitrogen
There are three benefits manure brings to a cropping system, Koelsch says. From a fertility standpoint, the first is phosphorus. Generally speaking, that's the most valuable component in manure.

For wheat growers, the benefit is more apparent, since wheat has a higher phosphorus soil level requirement than corn. For wheat, it's recommended to apply manure when soil phosphorus levels are 25 parts per million or lower. For corn, it's 15 ppm.

"Manure is a great way to bring the soil's phosphorus level up to raise a good wheat crop. Maintaining soil phosphorus at levels needed by crops, but minimizing excess phosphorus in our soils, is important for achieving both an economic 'win' and an environmental 'win' from manure," Koelsch says, adding that historically, growers with livestock have applied manure on the same crop field year after year, resulting in building phosphorus levels up too high. "I think that was part of the reason we thought of manure as a waste product. There was no value from that phosphorus."

With that in mind, there will likely be enough phosphorus left over for the following crop after wheat, Koelsch adds. For that reason, it's probably best to avoid applying manure on the same field two years in a row, and target fields that are low in soil phosphorus to get the most value.

That's why when applying feedlot manure or poultry litter high in organic nitrogen, it's best to apply it for the following corn crop. Swine or dairy slurry manure's higher ammonium N content will better meet a wheat crop's nitrogen requirement.

Nitrogen and phosphorus values and requirements will vary greatly between manure types, cropping systems and the individual field. So, it's a good idea to conduct a manure analysis and test for soil phosphorus levels before making a decision.

Biggest value is organic matter
The biggest value of manure and litter is an improvement to soil organic matter, Koelsch says. "That's the real advantage manure has over any commercial fertilizer," he says. "It's not a value you can put in the pocket book, but a value for resiliency of the soil."

Higher soil organic matter means more food for the microbial population in the soil to make polysaccharides, which Koelsch describes as "the glue that forms aggregates in our soil." Higher aggregate stability means improved infiltration, water-holding capacity and reduced erosion.

This change improves a soil's resilience to drought and reduces the movement of pollutants to nearby surface waters. "Animal manures can contribute to water and soil quality improvements, if we keep soil phosphorus levels near an agronomic level of value to crops," Koelsch adds.

In east-central Nebraska, Costco recently announced it selected Fremont as the site to build a state-of-the-art poultry processing facility. Because it will need over 300 broiler houses in the surrounding area to supply it, crop growers will soon have another source of litter in addition to those from swine and dairy facilities and feedlots in the region. "You're going to have an opportunity in this region with poultry," Koelsch says. "I encourage you to ask, 'Which of my fields can achieve an economic and an environmental win from animal manures?'"