Recent shift to more frequent rain events will cause foliar diseases to increase in intensity in Alabama crops. 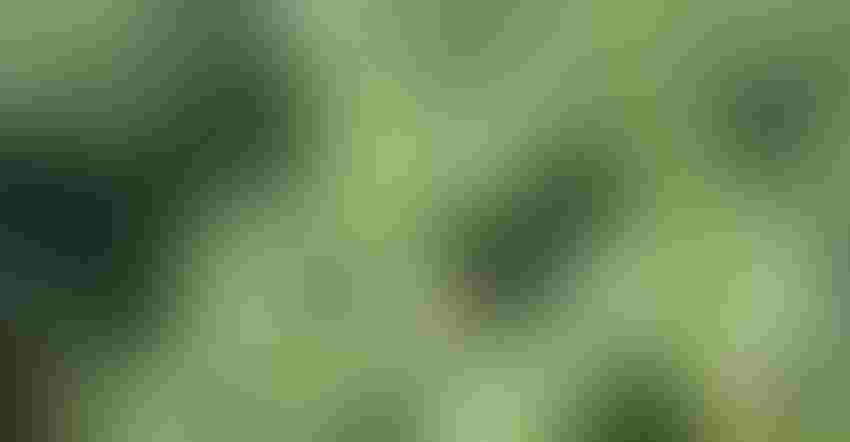 Hot, dry weather throughout the growing season has kept foliar diseases in Alabama crops in check. However, the recent shift to more frequent rain events will cause foliar diseases to increase in intensity. Alabama Cooperative Extension System plant pathologists encourage producers to scout and make timely fungicide applications when necessary.

Alabama Extension Plant Pathologist Ed Sikora said aerial web blight has been identified in several fields in the Blackbelt and northeastern Alabama in the past three weeks.

“Aerial web blight is a fungal disease that prefers hot, dry weather with intermittent rain showers,” Sikora said. “A field with trees around the edges is more likely to become infected first since this limits air movement and increases the chance of shaded areas where the fungus can more easily develop.”

All soybean varieties are considered susceptible to this disease. Sikora said symptoms of aerial web blight can appear on pods, stems and leaves of infected plants. When scouted early in the morning while dew is present, leaves can become matted together and appear to be water-soaked. When dew burns off later in the day, lesions on infected plant material can appear as reddish-brown spots. Aerial web blight can be a problem until the pod fill. The most important growth stages to protect the plant are from flowering to pod fill.

Soybean rust is another disease for producers to be aware of, but Sikora does not anticipate that it will be a major problem any time soon.

“The constant rainfall in the Gulf Coast region in recent weeks favored develop of the rust, though the amount detected was minimal,” Sikora said. “This was the first report of this disease in Alabama this year.”

Amanda Scherer, a cotton and peanut plant pathologist, said high humidity and temperatures along with canopy growth will favor prolonged periods of leaf wetness in crops and will drive disease pressure across Alabama.

Stemphylium leaf spot is occurring in cotton fields throughout Alabama. It is a secondary fungal disease commonly associated with potash (K) deficiencies in cotton.

She said the disease cannot be controlled with fungicides. If potassium deficiencies are caught before the fourth week of bloom, a foliar application of potash may lessen damage in irrigated fields or dry land fields with adequate moisture. Foliar applications only deliver a few pounds of K, so they are not a means of correcting a significant K deficit. However, Scherer said foliar applications may sustain leaf health for a few days to a couple of weeks.

Target spot is already present in central and south Alabama.

She said producers should be proactive by routinely scouting their cotton fields for target spot to make management decisions. Timely fungicide applications will reduce target spot severity and will offer yield protection—especially in high-yielding cotton. Apply fungicides for target spot between the first and sixth week of bloom using recommendations outlined in the most recent issue of the Alabama Crops Report newsletter.

Aereolate mildew is easily recognizable by the appearance of white mildew growth covering parts of or entire leaves. Symptoms will first appear in the lower canopy and move upwards similar to target spot. Fungicides should be applied at the first sign of disease followed by a second application as needed.

Scherer makes specific control recommendations in the most recent issue of the Alabama Crops Report newsletter.

Scherer said CLRDV is present in central and south Alabama. One of the first noticeable symptoms is bronzing of new foliage. She said producers should scout for CLRDV but should keep in mind that these symptoms are also associated with fertility issues and other factors.

“Unfortunately, there is nothing that growers can do at this point to manage the disease,” Scherer said. “My advice to producers is not panic and continue to manage their cotton crop to the best of their ability.”

Scherer said there are reports of TSW in peanuts this year.

“Early planted peanuts and fields treated with imidacloprid (instead of Thimet) are more at risk for TSW,” Scherer said. “Unfortunately, there is not much we can do at this point in terms of management.”

She encourages producers to scout frequently and use the Peanut Rx guide when planning for the next growing season.

Source: Alabama Cooperative Extension System, which is solely responsible for the information provided and is wholly owned by the source. Informa Business Media and all its subsidiaries are not responsible for any of the content contained in this information asset.