&bull; Resistance to Bt crops has already emerged in India, China and Puerto Rico, where damage by resistant fall armyworms to a Bt corn variety resulted, for the first time in the U.S., in withdrawal of this variety from the market.&bull; Although cold temperatures prevent their northward movement, Bt-resistant fall armyworms from Puerto Rico are believed to have migrated into Florida, representing a risk to southern growers and organic farmers. 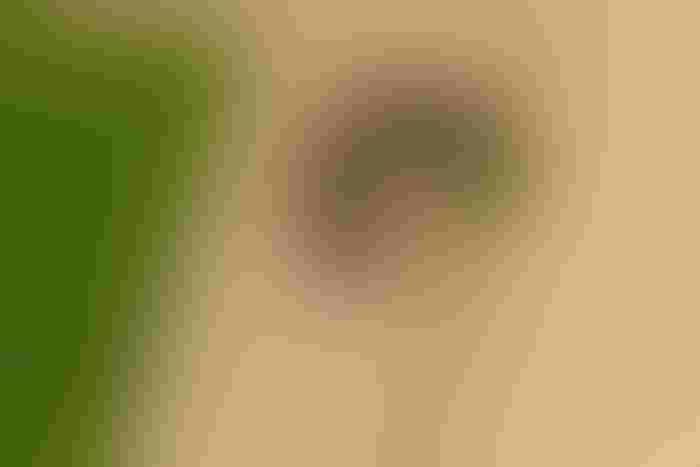 <p> <em><strong>A SUSCEPTIBLE fall armyworm larvae feeding on segments of Bt corn died after eating a small piece of the leaf. Resistant worms that have eaten from the whole leaf remained healthy. </strong></em></p>

Pesticides derived from the bacterium Bacillus thuringiensis — widely known as Bt — have been important to farmers since the 1920s.

Sixteen years ago, transgenic seed that produces insecticidal Bt proteins became available. Use of these transgenic Bt crops in the U.S. has reached 75 percent of cotton and 65 percent of corn acreage, while Bt pesticides are the most important insect control method available to organic farmers.

The Bt crop technology has saved producers millions of dollars by increasing yields and greatly reducing applications of broad-spectrum chemical pesticides. These factors make Bt important to both agriculture and human health.

Yet entomologists know that constant exposure creates evolutionary pressure for insect pests to become resistant to a pesticide. That’s why Bt plants are required to produce a high dose of insecticidal toxin and producers adopting Bt crops have been mandated to plant non-Bt refuges to bolster populations of susceptible insects in their fields. Susceptible insects emerging from these refuges mate with and dilute any resistant populations.
However, resistance to Bt crops has already emerged in India, China and Puerto Rico, where damage by resistant fall armyworms to a Bt corn variety resulted, for the first time in the U.S., in withdrawal of this variety from the market.

Although cold temperatures prevent their northward movement, Bt-resistant fall armyworms from Puerto Rico are believed to have migrated into Florida, representing a risk to southern growers and organic farmers.

“However, we’re starting to see the first cases of field-evolved resistance, suggesting that some of the high-dose and refuge requirements have not been fulfilled. Companies are now developing new Bt crops containing different combinations of Bt toxins to reduce dependency on refuges and further delay resistance while providing better control of the insects.”

Through collaborators at the USDA, Jurat-Fuentes acquired Bt-resistant fall armyworm caterpillars from Puerto Rico to study. In the lab, he and Ph.D. students Siva Jakka and Liang Gong are working to pin-point the exact mechanism responsible for resistance to Bt corn.

That knowledge would enable agrochemical companies to develop improved Bt crops and sensitive assays to quickly determine if resistant insects are present in production fields.

While the EPA currently mandates such monitoring, the methods used require capturing insects and analyzing subsequent generations in the lab, which is lengthy, costly and laborious.

“It takes months to do this and a lot of work,” Jurat-Fuentes says. “So if we come up with a DNA-based assay that can be done in a day with a caterpillar or moth from the field and tell whether the resistance gene is present, then we can have a great economic impact on monitoring for resistance.

We do have collaborations with some companies that support part of our research, so what we find is of great scientific and applied interest.” Jurat-Fuentes’ research is also funded by a grant from the USDA National Institute of Food and Agriculture, highlighting its importance.

For the promise of his research, Jurat-Fuentes was one of 18 researchers worldwide last year who was honored as a DuPont Young Professor.
“To develop resistance, an insect must change something,” Jurat-Fuentes explains. “Although we have some ideas from lab research, our project represents the first effort to understand what field insects change to become resistant to Bt crops. We are also interested in learning about how resistance is transmitted and the fitness of the resistant compared to susceptible armyworms to evaluate and improve current resistance management mandates.

“If we can delay emergence of resistance through better detection and control of the resistant insects, we can perhaps preserve the effectiveness of Bt for years to come.”

UT AgResearch operates 10 unique research facilities across the state of Tennessee. In addition to its agricultural research programs, the UT Institute of Agriculture also provides instruction, research and public service through the UT College of Agricultural Sciences and Natural Resources, the UT College of Veterinary Medicine, and UT Extension offices in every county in the state.