&bull; As a result of his accomplishments as a crop farmer and agribusiness investor, Rast has been selected as the South Carolina state winner of the Swisher Sweets/Sunbelt Expo Southeastern Farmer of the Year award. 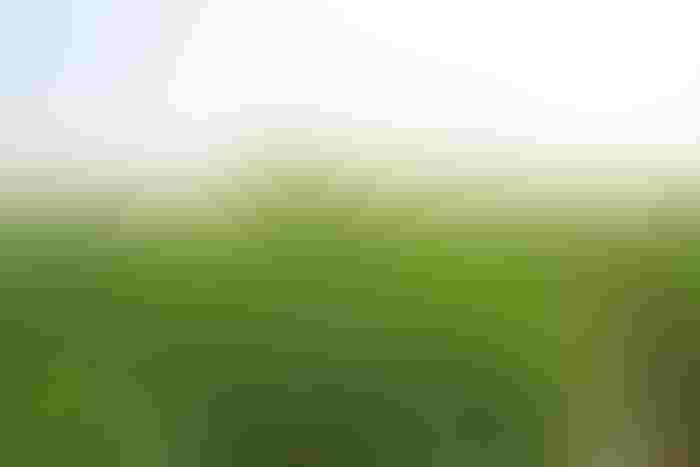 Edward “Monty” Rast of Cameron, S.C., used the discipline he learned as a business management major at The Citadel, The Military College of South Carolina, to develop a modern farm and several farm-related businesses.

As a result of his accomplishments as a crop farmer and agribusiness investor, Rast has been selected as the South Carolina state winner of the Swisher Sweets/Sunbelt Expo Southeastern Farmer of the Year award. Rast now joins nine other state winners from the Southeast as finalists for the award. The overall winner will be announced on Tuesday, Oct. 16 at the Sunbelt Ag Expo farm show in Moultrie, Ga.

“My dedicated employees and business partners are responsible for any farming success I may have had,” says Rast. “This is their award as much as it is mine.”

He has helped introduce other farmers to the benefits of global positioning systems (GPS). He uses GPS, field mapping and automated steering on his own equipment. For instance, he plants peanuts into heavy residue and uses GPS guidance to efficiently harvest his peanuts. “I also use GPS guidance for spray and fertilizer applications to avoid overlaps,” he adds.

Rast irrigates about half the land he farms. He relies on long-term land leases to justify his irrigation investments on rented land. He also hedges his production risks by using crop insurance.

Two of his farming ventures are Edisto Blueberries and Cannon Bridge Strawberries. His five acres of strawberries yield 20,000 pounds per acre per year. On seven acres, he grows 2,500 highbush blueberry plants per acre in plastic pots. Each blueberry bush yields about 10 pounds per year.

He sells the strawberries at retail markets in Orangeburg, S.C., and delivers the blueberries to the State Farmers Market in West Columbia, S.C. “I also give away strawberries to charities, friends and business associates,” he adds.

He uses the Pinnacle marketing program of Palmetto Grain Brokerage to sell his grain crops. He sells his cotton through direct sales to Parkdale Mills. He contracts peanuts each year and markets them through Carolina Peanut. Rast started growing peanuts on a large scale in 2003 after the quota poundage system was eliminated. “We needed a rotation crop for cotton,” Rast says.

After graduating from The Citadel, he worked two years as a tax appraiser for the South Carolina Tax Commission. After that, he worked four years on his father’s farm. While doing so, he decided to farm for himself. “At that time, the Payment-in-Kind (PIK) program was available, so I rented a large farm in Orangeburg County and entered it into the PIK program,” he recalls. “This move netted me enough money to expand my operation during the next few years.”

As he started his own farm, he also worked six years as a field supervisor with the Boll Weevil Eradication Program. After boll weevil eradication succeeded, he took another job managing Interlaken Plantation.

At Interlaken, he added a hunting and wildlife management program to the farming operation. By 2002, he needed to devote more time to his own farm, so he left Interlaken. And at that time, he started building Carolina Peanut with several partners.

Carolina Peanut, based in Cameron, is one of his most successful business investments. This firm is a buying point for Birdsong Peanuts and John B. Sanfilippo & Son peanut processors. Carolina Peanut is building a new warehouse that will be leased to Birdsong. He also helped to start Pee Dee Peanut, a new buying point in Mullins, S.C.

He invested in Top Dollar Cotton Co. This firm links gins with textile mills to help market cotton and is based in Orangeburg, S.C. “Top Dollar is aimed at passing savings along to farmers and it evolved from our marketing partnership with Parkdale Mills,” says Rast.

Cameron Agriculture Service is his newest business. It specializes in marketing and shipping cottonseed by rail. He located this business at an old fertilizer plant with railroad access.

“We don’t have strong markets for cottonseed here in South Carolina,” he says. “This facility will expose our cottonseed to buyers in the West and North, and if we can get better prices, we will benefit both local farmers and local gins.” He anticipates that seven South Carolina gins will furnish cottonseed this year for handling by Cameron Agriculture Service.

“I really enjoy the process of launching these businesses,” says Rast.

Rast earned the rank of Eagle Scout, served as class president at The Citadel and is a private airplane pilot. He chaired the Young Farmer and Rancher Committee for South Carolina Farm Bureau. He served on the Calhoun County Clemson Extension Advisory Committee. For the past eight years, he has been a member of the South Carolina Peanut Board.

He was a member of the National Cotton Council Leadership Development Committee. He has also represented farmers from the Southeast as winner of High Cotton award sponsored by Farm Press Publications.

He is active in Resurrection Lutheran Church where he has been a church trustee.

His wife Kathy has an off-farm career in merchandising high-end Carlisle brand fashions. She has been very active in supporting Heathwood Hall Episcopal School in Columbia, S.C.

When she lived in Augusta, Ga., she served as president of the Junior League of Augusta and the Green Court Garden Club. She was active as special events coordinator for the St. Joseph Foundation. She chaired a gala to benefit the Morris Museum of Art. She also served on the boards for the Children’s Hospital, the Gertrude Herbert Institute of Art and the Augusta Child Advocacy Center.

The Rasts have four children, daughters Erin, Ansley and Eliza, and a son, Walker.

Brian Callahan with the Clemson University Cooperative Extension Service is the state coordinator for the Swisher Sweets/Sunbelt Expo Southeastern Farmer of the Year award.

Charles Davis, Jr., Clemson Extension agent in St. Matthews, S.C., nominated Rast for the award.  Davis says, “Monty is a farmer who thinks outside the box. He’s an entrepreneur who is always looking at new ventures. He has been a strong supporter of Clemson University and has been willing to take on leadership roles in the peanut industry. He is, without doubt, a sharp businessman.”

As the South Carolina state winner of the Swisher Sweets/Sunbelt Expo award, Rast will now receive a $2,500 cash award and an expense paid trip to the Sunbelt Expo from Swisher International of Jacksonville, Fla., a $500 gift certificate from the Southern States cooperative, and the choice of either $1,000 in PhytoGen cottonseed, or a $500 donation to a designated charity on behalf of our newest sponsor, Dow Agrosciences.

He is now eligible for the $15,000 that will go to the overall winner. Other prizes for the overall winner include the use of a Massey Ferguson tractor for a year from Massey Ferguson North America, another $500 gift certificate from the Southern States cooperative, and the choice of either another $1,000 in PhytoGen cottonseed, or a second $500 donation to a designated charity on behalf of our newest sponsor, Dow Agrosciences.

Swisher International, through its Swisher Sweets cigar brand, and the Sunbelt Expo are sponsoring the Southeastern Farmer of the Year awards for the 23rd consecutive year. Swisher has contributed some $884,000 in cash awards and other honors to southeastern farmers since the award was initiated in 1990.

South Carolina has had one overall winner with Ron Stephenson of Chester being selected as the Southeastern Farmer of the Year in 1994.

A distinguished panel of judges will visit the Rast farm, along with the farms of the other nine state finalists, during the week of Aug. 5-10.

The judges for this year include Charles Snipes, a retired Mississippi Extension weed scientist who is president and research scientist with Stoneville R&D, Inc., from Greenville, Miss.; John McKissick, a longtime University of Georgia Extension ag economist from Athens, Ga.; and farmer Brian Kirksey of Amity, Ark., who was selected as the overall winner in 2008.