It is this year when the system really showed its worth. Without cover crops, Hedrick said his corn and soybeans wouldn&rsquo;t be worth harvesting and he would have to call his crop insurance agent. 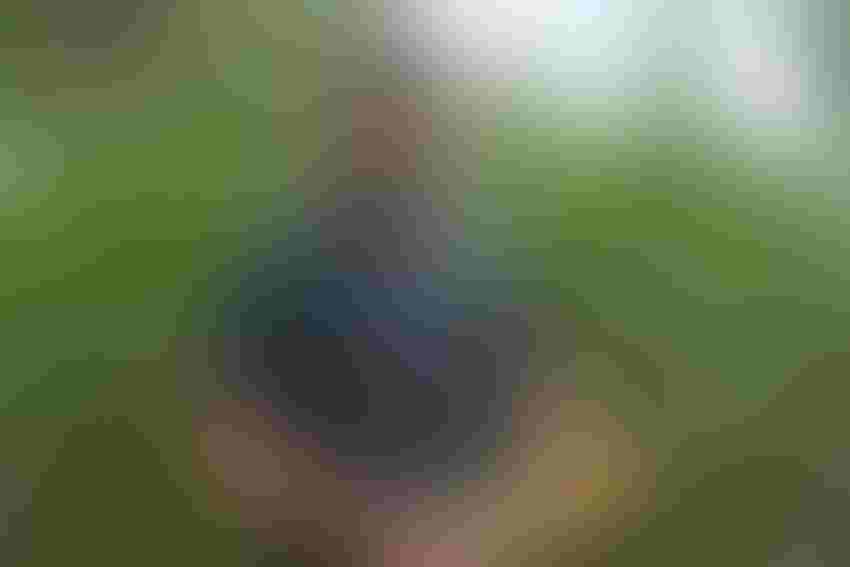 <p>Hickory, N.C. farmer Russell Hedrick says a system of no-till combined with a multi- species cover crop mix has really paid off in a year of drought and heat stress.</p>

Ever since he started farming in 2012, Russell Hedrick of Hickory, N.C. has used a combination of no-till and multi-species cover crops to build soil health and increase yields.

The system has worked well for him for the past three years but is really proving its merit this year when heat and drought has devastated crops in North Carolina’s Piedmont.

“We’ve only had four inches of rain. We’re really dry,” Hedrick said on Aug. 21, as his corn was nearing the dent stage. “We’re hoping to average 110 bushels per acre this year. The insurance company insured my neighbor out at nine bushels per acre. Cover crops really saved us this year.”

This has been the hottest and driest year the 30-year old farmer has faced in his four years of full-time farming. Last year, when moisture was adequate, Hedrick was able to produce 224 bushels of corn per acre, and he credits a combination of no-till and multi-species cover crop blends for his success.

But it is this year when the system really showed its worth. Without cover crops, Hedrick said his corn and soybeans wouldn’t be worth harvesting and he would have to call his crop insurance agent.

“Cover crops don’t shine as much as they should when you’re getting a good amount of rainfall. But with the heat and drought this year, it’s been a shining moment to show that cover crops do have their place because we get more hot and dry years than we get good years in the Piedmont,” Hedrick said.

Cover crops are a tool, just like no-till, and Hedrick explains that that the two must work together. An important key is the mixed species blend of five different plants: cereal rye, triticale, oats, crimson clover and tillage radishes that helps build soil nutrients, moisture and increased organic matter.

“The whole reason for cover crops is the biology in the ground,” Hedrick explained. “Through low soil disturbance systems and cover crops, we sequester carbon in the ground. We’re able to put 100 to 120 pounds of active carbon each year in the soil profile. Instead of releasing carbon dioxide in the air, we are pumping carbon back into the ground and feeding biology.”

When Hedrick does receive heavy rains, he is able to take that heavy rain and put it into the soil profile thanks to the protective mat that no till and cover crops provide.

“Instead of having runoff and nutrient loss, we’re able to store nutrients in the soil. We’ve seen nutrient levels actually go up. This year, we’ve been able to cut our fertilizer input by 60 percent, he said. “For every 1 percent of organic matter,  we can hold about 15,000 to 27,000 gallons of water so we’ve really been able to increase our water holding capacity.”

Hedrick credits the protective mat for holding the water and nutrients. Without the mat, the soil would be at a higher temperature and there would be more evaporation. “The mat keeps the soil 20 degrees cooler,” he said.

Hedrick plants the cover crop using a no-till drill within 14 days after he harvests his corn or soybeans. He allows the blend to grow four to six feet in height, and then we will take an old cultipacker and roll it down. This provides the protective four to six inch thick mat and builds organic matter.

No insecticides and suppressing pigweed

“Because of the mat, we didn’t post spray this year. It provided a physical barrier for the weeds,” he said. “We have a lot of pigweed issues in this county but pigweeds haven’t been a problem for us.”

Hedrick credits the mat and the allelopathic effect of the cereal rye in the cover crop for suppressing the pigweed. “Pigweeds and cereal rye don’t get along very well,” he said.

As for plant bugs, they haven’t been an issue. Hedrick hasn’t applied insecticides for the past two years. “If you’re using too many fungicides and insecticides, you won’t have any of the beneficials. We’re finding ladybugs and spiders coming in so kudzu bugs and stink bugs are not so bad,” he said.

And a big plus, Hedrick has seen earth worms on his farm for the past two years. “Before then, we’ve never had earth worms on our farm. They come in and start breaking down this residue and carry some of the carbon a little deeper in the profile,” he said.

And for the second year now, Hedrick has incorporated cattle into his system. He credits Lee Holcomb,  his local USDA NRCS district conservationist,  and Ray Archuleta, conservation agronomist with USDA’s NRCS East National Technology Center in Greensboro, for showing him the benefits.

“I told Ray I can’t afford cows and Ray told me ‘you can’t afford not to,’” Hedrick said. “It the best advice I’ve received from NRCS. Once we introduced cattle into our system, it completely changed the dynamics of our soil. Every time these cows bite these cover crops, they are forcing those grasses to release those exudates and by forcing that we are really able to stimulate the biology in our ground.”

Hedrick has travelled the country speaking at NRCS seminars where he has stressed the benefits of cover crops and he has hosted soil health field days on his farm. He said many farmers he talks to worry about the expense of cover crops because the seed costs in a cover crop mix can total $30 to $55 per acre or more.

“They see that seed cost as a big hurdle to using the system and they don’t want to write that check in the fall. But I stress to them that the cover crop mix provides a return on investment by saving on chemicals and fertilizer and making more yield,” he said.

Hedrick explains that cover crops can provide a farmer $100 to $125 per acre in savings per acre, a clear return on the $55 invested in seeds in the fall.

He adds that cover crops require extra management and time, but once they do get a good spring rain they hold the moisture and make it available to the cash crop after the cover crop is terminated. Hedrick points to the fact that he has 10 to 12 foot tall corn in a year of severe drought that cover crops and no till indeed do work.

“We feed the soil and the soil feeds us in return,” Hedrick said.