Amid predictions of global famine, American consumers will see disruptions until the economy is back online. 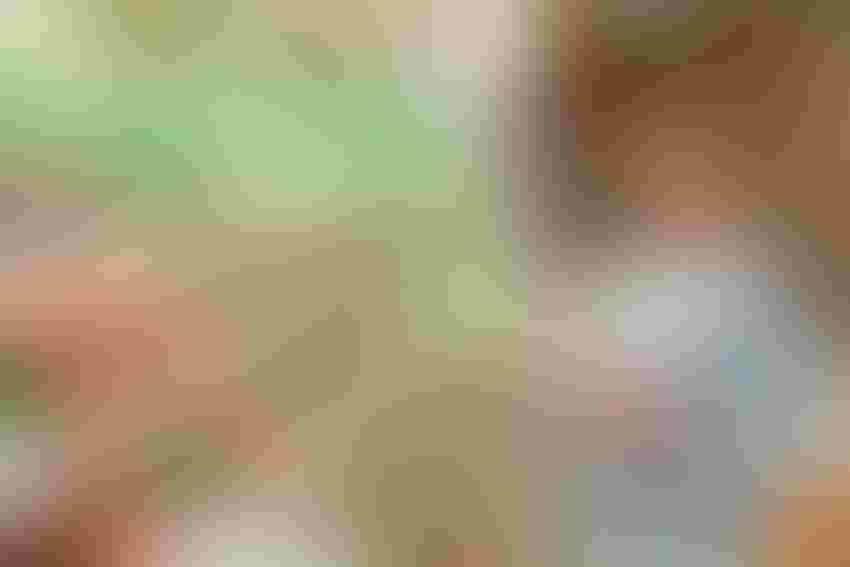 A shopper checks out meat cuts at a grocery store.USDA ARS

Amid coronavirus-related food shortages a United Nations agency warns could cause “famines of biblical proportions” worldwide, supply disruptions in the United States will be temporary but noticeable, industry and food-security experts tell Farm Progress.

Closures of meat packing plants around the country are causing supply-chain hiccups that could make some cuts of meat scarcer or more expensive in the coming weeks, industry insiders say.

How long the disruptions last will depend on how many animals producers have to kill because of a lack of processing capacity and a resulting lack of income, said Ryan Bernstein, senior vice president of the McGuireWoods legal and public policy consulting firm.

“Right now a lot of producers are making decisions based on this year’s production and how much they can handle, especially in the hog world,” said Bernstein, a former Capitol Hill aide and a South Dakota farmer.

Some meat shortages can be expected in the next few months, said Steve Groff, a Pennsylvania-based farmer and cover crop expert who has worked to improve nutrition in the developing world.

Americans are accustomed to a “just in time” food system that has now been significantly disrupted, and some commodities such as tomatoes can’t just be stored on the shelf for a few weeks until things get sorted out, he noted. That said, Groff doesn’t anticipate shortages in vegetables, he said.

“I don’t think there’s going to be any widespread famine, but I do thin there will be sporadic, intermittent food shortages with certain things,” Groff said. “Meat is the obvious thing right now. I’m telling people the next time they go to the grocery store, buy a little extra hamburger … If you have a freezer, fill it up.”

A meat shortage could create an opportunity for plant-based meat substitutes to fill gaps, although that industry is now geared largely to restaurants and is having to shift its attention more toward consumers at home, Bernstein said.

The remarks come after David Beasley, director of the United Nations’ World Food Program, said last week that production stoppages and trade disruptions because of the coronavirus outbreak could contribute to a global “hunger pandemic” of “multiple famines of biblical proportions within a short few months.”

A separate report April 23 by the International Food Policy Research Institute said the COVID-19 pandemic “has all the makings of a perfect storm for global malnutrition,” with vulnerable groups in developing countries facing “a dangerous decline in dietary quality” stemming from income losses related to government-imposed shutdowns of businesses and schools.

The group noted the virus particularly threatens maternal and child health, both directly and indirectly. Pregnant women and mothers with young children are vulnerable to COVID-19 itself, but they’re also less likely to receive the routine health services they need because of travel restrictions or heavily impacted health facilities, the IFPRI asserts.

“Every economist agrees that the massive hit to the world economy and trade will likely cause millions of very poor people to be out of work and with no income,” said agricultural economist Daniel Sumner, director of the University of California’s Agricultural Issues Center. “This is a consequence of the disease, but also of the policy of shutting down the economy.

“In poor countries, when the economy is shut down, the poorest people get even more hungry and people die, especially the kids,” Sumner said in an email.

In the United States, Bloomberg News cites estimates that as much as 80 percent of U.S. meat production capacity could shut down as plant closures escalate. As of Monday, plant closures in 10 states – from Washington to Pennsylvania – were leaving Americans dangerously close to seeing meat shortages at grocery stores while farmers were facing the likely culling of millions of animals, the wire service noted.

On Sunday, Tyson Foods Chairman John Tyson said in a blog post that the U.S. food supply chain “is breaking,” with millions of pounds of meat set to “disappear” as plants close.

In response, President Donald Trump on Tuesday announced plans to use the Defense Production Act to order meat-processing plants to remain open as critical infrastructure and sign an executive order to shield meat packing companies from legal liability.

The order sets the stage for a showdown between America’s meat giants, which have been pressing to reopen plants, and some local officials and labor unions who’ve called for closures in a bid to prevent the virus from spreading, Bloomberg observes.

“This will at least stem the cascading effect of plant closures and should help plants get back online sooner, especially if the federal government dedicates more PPE (personal protective equipment) and resources to these facilities and workers,” Bernstein, of McGuireWoods, said.

Sumner and two other UC economists issued a study earlier this month asserting that the U.S. food system is resilient and there is little reason for alarm about long-term food availability amid the coronavirus crisis.

While shoppers across the country have seen empty store shelves and rising prices for some products, neither overall consumption nor farm supply of food has changed much, according to the Agricultural Issues Center study.

“Active, vigorous and efficient global markets allow millions of farms to supply billions of consumers, with many companies in every commodity and product to help match supply to the demand,” Sumner told Farm Progress.

“There are always logistics problems; I do not want to make it sound easy,” he said. “The people in the business from California rice and dairy to Midwest wheat and other grains will work night and day to get the products from the suppliers to the demanders.”

The big challenge, he said, is the massive expected income hit to the food trade. Some politicians may try to block imports or exports from countries, but overall Sumner believes countries will allow trade to flow so the markets can stabilize prices and quantity flows.

“The biggest problem is finding ways to help the very poor not become even poorer,” he said. “Sickness from COVID-19 or other disease is worse for the already weakened. Agriculture will produce the food and agribusiness will get it to who needs it, but somebody has to be in a position to pay the costs.”

Groff, the founder of seed producer Cover Crop Solutions, said he cringed a little when he read the talk of global famines. But he said he’d like to see more of a focus in the media on the importance of nutrition to build healthy immune systems.

“My encouragement for people is to be really intentional about what you eat now,” he said. “High-sugar diets are less immune to some of these diseases.”