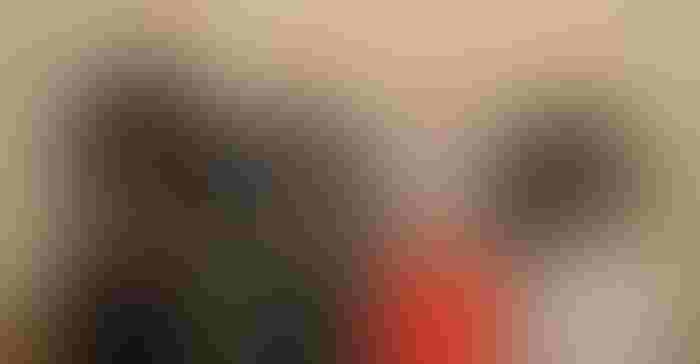 For the past 25 years, Wisconsin has had a stranglehold on milk production records. Floyd and Lloyd Bauman, who owned Twin-B Dairy in Marathon, set a world milk record in 1997. Their cow, Miranda Oscar Lucinda, made an outstanding milk record of 67,914 pounds of milk in 365 days.

Then Wisconsin Master Agriculturists set the next four world records.

“We were quite honored to win the award,” Tom says. “This award has been given by the National Holstein Association for more than 100 years.”

In 2015, My 1326 was replaced by Bur-Wall Buckeye Gigi as the world record milk-producing cow. Gigi was bred by 2009 Wisconsin Master Agriculturists Wallace and Donna Behnke of Bur-Wall Holsteins, Brooklyn. Gigi calved at 8 years old and set a 365-day record of 74,650 pounds of milk, with 2,126 pounds of fat and 2,142 pounds of protein. By comparison, the average Holstein cow in 2021 produced 24,953 pounds of milk, 918 pounds of butterfat and 773 pounds of protein.

“She certainly had quite a personality,” Donna Behnke recalls. “She was a very large cow. We kept her in a pen because she was so big — she didn’t fit in a tiestall.”

Bur-Wall Holsteins is owned by the Behnkes’ son Bob. Bob purchased the cows from his parents, who own the farm. In September 2017, tragedy struck when the Behnkes’ dairy barn caught on fire, destroying the barn and killing Gigi and half of their dairy cows. Bob rebuilt a freestall barn and double-8 swing parlor, and today milks 88 registered Holstein cows on the family’s Green County farm.

All in the family

In 2016, Ever-Green-View My Gold-ET, bred and owned by the Kestell family, set a single-lactation national milk production record. As a 4-year-old, My Gold milked 77,480 pounds of milk, with 1,992 pounds of fat and 2,055 pounds of protein, in 365 days. Her production broke the world record previously set by Bur-Wall Buckeye Gigi.

Tom says My Gold calved Nov. 6, 2015, at age 4 years and 3 months. She finished her 365-day record on Nov. 5, 2016. Even though her dam had a record-setting lactation, the Kestells didn’t realize My Gold was going to set a world record until about halfway through her lactation.

“She averaged 212 pounds of milk per day, and peaked at 242 pounds on test,” Tom explains. “We knew she was milking well, but you don’t know what everyone else had.”

The Kestells and their son Chris and his wife, Jennifer, milk 130 registered Holstein cows at Ever-Green-View Holsteins in Sheboygan County. Their herd average is 44,968 pounds of milk with 1,878 pounds of butterfat and 1,447 pounds of protein, ranking it as the top milk-producing herd in the nation and the world.

3918 is owned by 2022 Master Agriculturists Scott Pralle and Pam Selz-Pralle of Humbird. Selz-Pralle Dairy, located in Clark County, milks 475 registered Holstein cows with a rolling herd average of 30,917 pounds of milk; 1,219 pounds of fat; and 969 pounds of protein. 3918 is scored Very Good-88.

3918 adds to this tradition of record-setting Holsteins from Wisconsin.

“3918 just does her job with no fuss,” Scott says. “That’s probably why we didn’t realize at first there was anything extraordinary going on.”

“She’s never been treated for any health or repro issues. That’s unbelievable at her age,” Pam adds. “She is a super athlete who makes a lot of milk and is a testament to the importance of dairy strength, health traits and stress-free cows.”

During 3918’s first four lactations, she averaged 143 pounds per day over 1,554 total days in milk. She bred back quickly each lactation and averaged 75 days for a dry period.

“3918 wasn’t given any special treatment to achieve this record,” Pam says. “She was housed in freestalls with her 80 pen mates, eating and resting at her own pace. On our dairy, we implement the same best management practices that are used on many dairies. The key is we are persnickety about strictly following them every day. Our staff is also trained and committed to premium cow care focused on minimizing stress and maintaining a low-bacteria environment.”

“That’s the equivalent of 9½ semi truckloads of milk,” says 1987 Master Agriculturist Alan Koepke says. He farms with his brothers Jim, (also a 1987 Wisconsin Master Agriculturist) and David, and Jim’s son John on their registered Holstein dairy farm near Oconomowoc.

“She was a very good cow,” Alan recalls. “She was a small cow but very smart. She let all the bully cows eat first, and then she would eat all she wanted without having to fight for feed with the others. She had very good feet, and that kept her healthy.” Granny died in 2006 when she was 20 years old.

Granny’s record stood until 2020, when a 15-year-old registered Holstein cow named Stone-Front Leader Hilda broke it. Hilda, owned by Andy Buttles of Grant County, Wis., produced 460,720 pounds of milk during her lifetime. She died two months after setting the record.

Click through the slideshow to see photos of these record-setting cows.