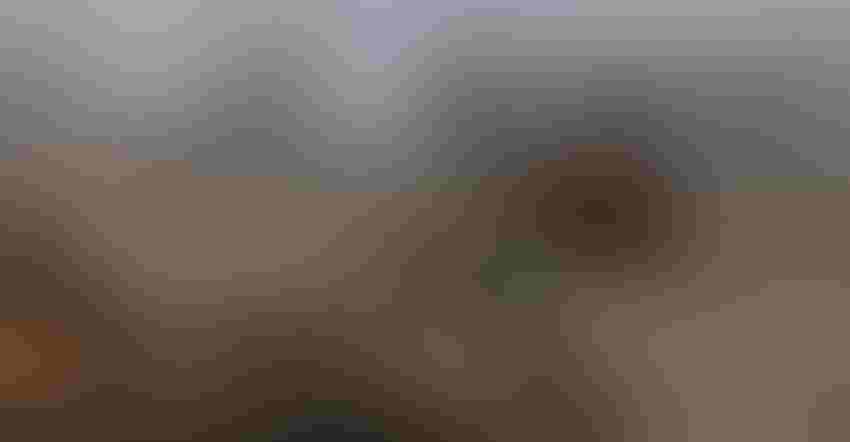 ASSESSING DAMAGE: A Ukrainian soldier checks the wreckage of a burnt Russian tank on the outskirts of Kyiv on March 31.Ronaldo Schemidt/Getty Images

With fertilizer supplies for spring planting season mostly secured across the Northern Hemisphere, the war had little impact on farm-level fertilizer prices. In the month following Russia’s invasion into Ukraine, an index of biweekly fertilizer and fuel prices in Illinois found only a 0.9% increase in retail NPK and diesel prices.

Spring planting demand triggered larger price gains following that period. But input availability remains a more pressing concern for growers in the Southern Hemisphere, who are already preparing for planting season during the third quarter of 2022 and are heavily dependent upon international fertilizer supplies.

Brazil is the world’s largest fertilizer importer, relying on international purchases for 85% of its fertilizer requirements. Its 2023 soybean crop to be planted this fall will need potash supplies by September to ensure trend-line yields.

Before the war, Brazil sourced over half of its potash supplies from Russia. In the weeks following Russia’s unprovoked invasion of Ukraine, Brazil negotiated deals with Canadian potash producers to procure supplies for the 2022-23 growing season.

“We can and must strengthen our ties and strengthen long-term partnerships, with a view to ensuring stability and profitability for all links in the production chain,” Brazil’s minister of agriculture, Tereza Cristina, said of Brazil’s new partnership with Canada in late March.

The U.S. is less dependent on Russian and Belarusian potash supplies, with only 11% of the U.S. 2021 potash supplies provided by the two countries. Canada will likely become a larger supplier to U.S. growers.

India will also buy more fertilizer from Canada. Before the war, India had tried to take advantage of discounts on Belarusian potash shipments but halted those efforts after the war’s onset amid costly sanctions.

India imports all of its fertilizer, and it typically relies on Russia and Belarus for a third of its fertilizer supplies. While it is possible India will try to broker a deal with the blacklisted countries if the hostilities relent, it is also increasing its fertilizer purchases from Israel, Saudi Arabia and Morocco in the meantime.

Brazil imports nearly all of its fertilizer from international sources, with Russia being a primary supplier. The trades are likely being made through Russian financial institutions not yet impacted by Western banking sanctions. Brazil’s purchases amid sanctions ensure that fall planting season will start off without any delays.

“Yara is currently reviewing the detailed scope and impact of the sanctions,” the company said in a statement. “However, Yara repeats its concern for global food security and calls on government action to protect food supply chains and decrease dependency on Russia.”

With sanctions banning Russian fertilizer exports, and China’s urea and phosphate production on lockdown through the first half of 2022, global competition for fertilizer supplies will be stiff through the next year.

Fertilizer companies are scaling up production to meet the unprecedented surge in demand, but no one knows yet when those supplies will come on line. Canadian-owned Brazil Potash Corp. will increase production in the Amazon region to meet demand.

Likewise, Nutrien announced in March it would increase potash production. After adding 1 million metric tons of potash output in 2021 in response to the tightening global supplies, it now expects 2022 production to propel the company’s potash output 20% higher than 2020 volumes. Nutrien produced 2.7 MMT of potash in 2020 and 3.1 MMT in 2021 — a 15% annual increase.

Nutrien’s global potash production is now forecast to rise to 3.2 MMT for this year. The company’s output is estimated to “account for more than 70% of global production added” over the past two years, according to a company statement.

Global fertilizer supplies have been constrained over the past year as supplies tightened due to multiple factors, including production imbalances leading into the pandemic, pandemic-fueled production slowdowns, growing global acreage expansion and trade disputes.

Russia’s invasion into Ukraine and the subsequent banking restrictions levied against several top Russian fertilizer producers will further constrain the market until either global competitors can expand production or Russia ends its Ukrainian occupation. Either option is likely to take at least months, if not years, to manifest, leaving fertilizer prices elevated.

With farm profits largely secure for the 2022 growing season in the U.S., fertilizer production expansion has thus far been largely left to develop at the will of the invisible hand of the market. Government incentives issued to these fertilizer producers for expansion purposes could be a short-term fix to increasing global fertilizer capacity.

It remains to be seen if political winds will create that option for markets in the Northern Hemisphere before growers make plans for the 2023 planting season. But USDA had some insights in the May 2022 World Agricultural Supply and Demand Estimates report.

USDA officials made a point of sharing in the Secretary of Agriculture briefing following last Thursday’s WASDE reports forecasts that limited fertilizer and input access in Ukraine will not dramatically reduce Ukrainian crop yields this year, but the availability issues could still have a negative impact.

It wasn’t the first time this year that fertilizer concerns have surfaced in global production forecasts and I’m guessing it won’t be the last, either. USDA attaché reports released in the month prior to Thursday’s WASDE release cited concerns about corn, soybean, and wheat yield shortfalls due to fertilizer, fuel, and other input availability primarily for Brazilian and Argentine 2022/23 production forecasts.

To be clear, this is a hypothetical concern. We will not see any evidence of yield losses due to reductions in fertilizer applications until later in the growing season. And – at least in the U.S. – those worries are probably not warranted for the 2022/23 crop year because growers largely had adequate access to desired fertilizer supplies.

The outlook for the 2023/24 growing season is murkier than 2022/23 in terms of inputs. Crop prices typically fall before input prices do, so global farmers could be forced into a situation where high input costs cause fewer fertilizer applications if crop prices fall. And fewer corn and wheat acres expected to be harvested in 2022/23 could lead fertilizer producers to scale back expansion plans if growers do not use available supplies in the latter half of 2022.

Fertilizer availability is obviously not the most significant issue facing global farmers in May as the market juggles planting delays and shrinking grain supplies. But it is an issue that is going to be relevant for the next couple years, so ensuring crop sales are locked in to cover future soil fertility is currently the safest way for farmers to hedge against these looming issues.

This is part three of four in the Black swan in the Black Sea series. Tomorrow’s article (part four) in this series will show how global trade relationships could realign in the Black Sea conflict era. Spoiler alert – it explains how trades in the edible oil market will likely foreshadow future trade alliances.

Black swan in the Black Sea: What next?