Will USDA give the bean market any bullish momentum?

Corn bears continue to pressure prices lower on thoughts of a massive record crop starting to be harvested here in the U.S.

There's also some talk amongst insiders that the current USDA old-crop export estimate might be a hair too high. Technically, the market appears content on trading to fresh new contract lows and perhaps testing a sub-$3 print.

Many bears inside the trade are talking about a downside target of between $2.80 and $2.85 per bushel. As a producer I hope that a sub-$3 number is not coming down the pipe, but the way the outside macro money is "rotating" we can not rule it out of the realm of possibilities.

Lets also keep in mind the USDA data isn't helping to build any type of bullish momentum. In fact in yesterdays data they showed the U.S. crop "unchanged" at 75 percent rated "Good-to-Excellent". They also estimated that 60 percent of the crop was "denting", which is well ahead of ahead of the 5-year average of 52 percent.

Moral of the story, it's tough to fight the bulls when you have three of the largest producing states in the U.S. showing crop-conditions well above 80 percent rated "Good-to-Excellent". As for the U.S. harvest, it's moving a bit slow down south due to all the recent rounds of heavy rains, but we still have Georgia 72 percent harvested; South Carolina 70 percent; Louisiana 59 percent; Texas 56 percent; Mississippi 30 percent; Arkansas 22 percent and Tennessee 2 percent complete.                                          GET THE DAILY VAN TRUMP REPORT NOW 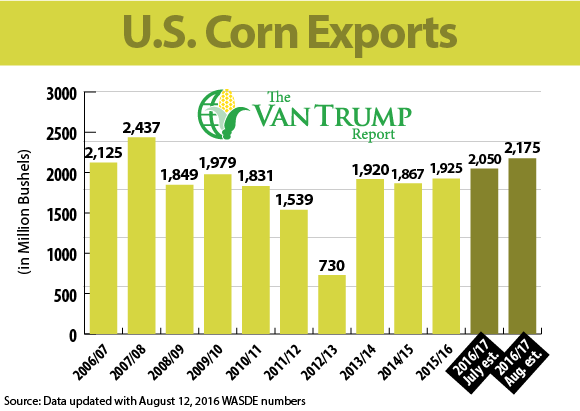