Why I am reducing more risk in soybeans

Soybean bulls have been in control as of late as the "demand" story continues to feed the bulls, particularly the demand story for palm oil and bean oil which continue to provide the most tailwind.

Malaysia is having palm production problems and the Asian nations are gobbling up supplies. I should also note that U.S. weekly export inspections remain massively large. Despite the bullish demand headlines, as a producer I remain nervous in regard to longer-term price depreciation.

In fact, on Monday's rally I was able to secure a floor under all of my remaining unpriced 2016 bushels and also made a small sale against my estimated 2017 production. I now have 15 percent of our estimated 2017 priced at an average of just over $10 per bushel.

Another reason I'm a bit nervous and uncertain moving forward is because I've never been a fan and have been burned several times during the past 20 plus years on soybean rallies lead by bean oil. Perhaps I just don't know or understand the nuances of this particular animal, but I almost always get bitten when bean oil is leading the charge.

Hence the reason I'm taking precaution and admitting that I've had a serious problem riding a bean oil bull, in years past. The other reason I wanted to lock in profits and reduce risk is because I still see major head winds in the macro space and believe we remain in an environment where hitting singles and getting on base is the key to winning. The continuing strength of the U.S. dollar and weakness in the Chinese currency is a bit concerning.

I see absolutely no reason to be swinging for the fences or trying to out predict the market. Take a smart "business" approach and look for ways to lock in profits and reduce longer-term risk, leave the speculation to the money-mangers and fund traders. Technically, there is still some heavy resistance eon the charts in the NOV16 contract up between $10 and $10.20 per bushel.

I have to imagine if this market can close above this area we will see even more technical bulls jump on the bandwagon. Probably another rally where I will be looking to reduce risk and make small cash-sales. Don't forget many insiders are already forecasting that the U.S. producer will plant an additional +3 to +5 million  more soybean acres next year, and many bears believe our current ending stock numbers could be creeping higher on better than expected yields. Also, keep in mind that most of the early estimates out of Brazil are calling for a crop in excess of 100 MMTs.

Planting seems to be going fairly smooth and is thought to now be close to 30% complete, which is slight ahead of schedule. I'm also not currently seeing a lot in the weather forecast that is overly worrisome. Obviously we all know that could drastically change further out on the horizon, but without a major weather hiccup in South America, it still feels like the market will have a tough time holding onto a major price rally.

My guess is that it will be quick and fleeting, so I'm shooting when the ducks are in the air. The USDA reported the U.S. harvest at 76 percent complete, up +14 percent from last week and right in-line with our 5-year historical average. States running the furthest behind their average are: Michigan -12 percent; Nebraska -10 percent; Kansas & Iowa -9 percent; South Dakota, Wisconsin -4%; Illinois, Minnesota -1%. States running ahead of their average are: Kentucky +27 percent; Arkansas +17 percent; Ohio +15 percent; Tennessee +9 percent; North Carolina +7 percent; North Dakota +6 percent; Missouri +4 percent; Mississippi +3 percent; Louisiana +2 percent.  GET THE DAILY VAN TRUMP REPORT NOW 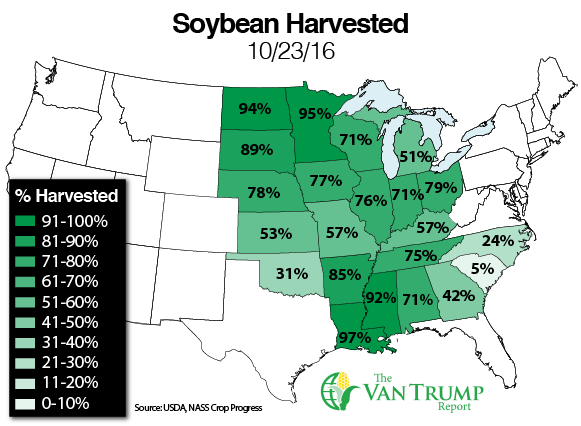