US supply vs. demand, but will global corn market trump both?

Corn bulls are pointing to headlines that the Chinese are cutting back on their corn acres.

Reports are circulating that the Chinese are trying to reduce their total corn acres by almost -9 percent during the next four years. Rumor is they've started by cutting about -5 million acres, their first real drop in corn acres in some 14 years.

The bulls are also talking more heavily about some key production areas in the U.S. seeing more complications within the crop than the USDA or the media is willing to print. I continue to have producers tell me the "tipping back" and "small kernel depth" is a real concern once they get out in the field.

Most say the crop looks absolutely terrific, but once you get in the field and pull a few ears there's a different story. Ultimately the bulls continue to say the yield is being overestimated.

Add to that, the Brazilian corn crop has less than a seven day supply in some areas and there is talk they are still having difficulty in meeting current demand.  If La Nina comes into play, the full season bean planting could be delayed, which would jeopardize Brazil's second crop corn planting, on the back end.

If that scenario would play out, the trade would find itself nervous with an already tight corn pipeline. Unfortunately, the bears aren't listening. In fact just yesterday, highly respected FC Stone, released their total U.S. corn crop estimate at a whopping 15.146 billion bushels on a fresh new record yield of 175 bushels per acre. 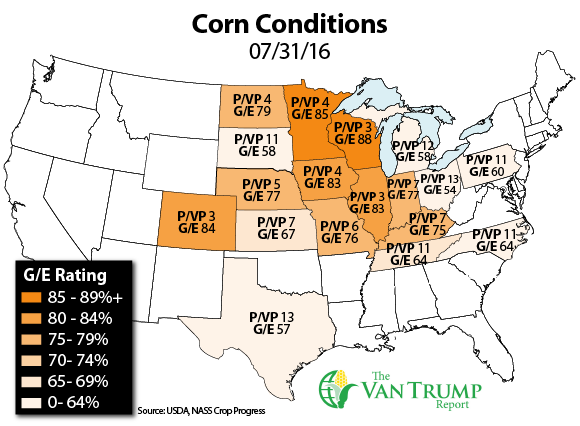