Soybean traders were eager to see both new-crop and old-crop U.S. ending stock updates today by the USDA.

There was obviously a lot of speculation and debate surrounding the export estimates but the numbers became a non event with no surprises. Also, of heavy interest will be export and production updates for South America.

Similar to corn and wheat, the USDA will be using the updated planted acreage estimates in their formulas, hence the thought of increased production, which was slightly higher being increased 80 million bushels.

The bears are quick to point out not only are we digesting a record number of acres planted here in the U.S., but also some of the best crop conditions in years. Just yesterday, the USDA bumped their crop-condition rating higher from 70 to 71 percent of the crop now rated "Good-to-Excellent," which is significantly higher than last year's record yielding crop of 48 bushels per acre.

Nobody was expecting the USDA to adjust their yield estimate higher in this report from the current 46.7, but if the weather continues to cooperate, the bears will continue to talk about a more acceptable looking balance sheet.

It was all about today's USDA numbers and the upcoming weather forecast for August. I continue to expect extreme volatility. Make certain you have a detailed plan in place so you are able to better execute when the markets are in high gear and your emotions are stirring.

As a spec, I still like the thought of being a buyer on a break to between $10 and $10.20 per bushel. As a producer, I'm keeping all remaining hedges in place and looking to reduce a bit more new-crop cash risk on a re-testing of the nearby highs. 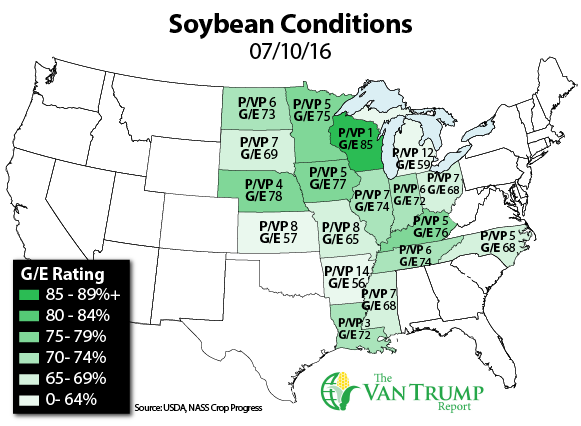