Can the Corn Market tailwinds continue?

Corn prices have rallied as of late on a slightly improved feel in the macro space and talk of continued rain delays in portions of the western and northern areas of the corn belt.

Technically, we've moved into an extremely important area on the charts between $3.45 and $3.55 per bushel. Insiders believe a close north of that area could  trigger more widespread short-covering and potentially spark a run back towards $3.80 vs. the DEC16 contract.

The recent rally in crude oil has provided a bit of a tailwind for the corn market as it brings about broader questions regarding the macro space. I suspect if we can get crude oil prices back above $50 per barrel and some type of  bullish weather story brewing in South America we could continue to push corn prices higher.

There are some extremely wet fields in many locations here in the U.S. and many producers continue to report less than forecasted yields once they are out in the combines. The USDA might be coming to similar conclusions as they reduced their weekly crop-conditon estimate from 74 percent down to 73 percent rated "Good-to-Excellent."

Keep in mind this is the first setback we've seen in several weeks. States with conditions pulling back are: Kansas, Illinois, Indiana, Iowa, Missouri and Tennessee all lowered by -1 percent. States showing a +1 percent improvement were: Colorado, Michigan, Minnesota, Pennsylvania and South Dakota.

The USDA reported the U.S. crop at 24 percent harvested vs. our 5-year average of 27 percent for this date. The crop is thought to be 86 percent "mature" vs. our historical average of around 79 percent.

States running behind are: Missouri -1 percent; Michigan -2 percent; Wisconsin -3 percent; Colorado -4 percent; Kansas and North Dakota -5 percent; Nebraska -6 percent; Minnesota and South Dakota -8 percent; Iowa -9 percent. There are still some extremely wet areas to the west and north that we will continue monitoring, but I don't currently see any type of game-changing conditions.

I suspect we see some huge gains in harvest during the next couple of weeks. And regardless of how you want to slice the average yield, more than likely we are still looking at a glut of domestic supply with ending stocks well north of 2.2 billion bushels.

Like I've mentioned several times the past couple of weeks, we need either a shift in the overall macro sentiment, which might be happening in crude oil, or we need a bullish story out of South America to grab hold of. Unfortunately, the oil story is still being highly scrutinized and there's simply not a weather story of any significance in South America...at least not as of yet.

As a producer, who has had the basis locked in for some time, I like the thought of remaining extremely patient in regard to pricing any additional 2016 cash bushels. I also don't mind deferring the sales into 2017, so I remain in no big hurry. I am however keeping a very close eye on the DEC17 contract, as prices are starting to move back closer towards $4.00 per bushel.

If you haven't reduced any of your estimated 2017 risk, I suggest you start working diligently on your game plan and taking a more well deserved look. 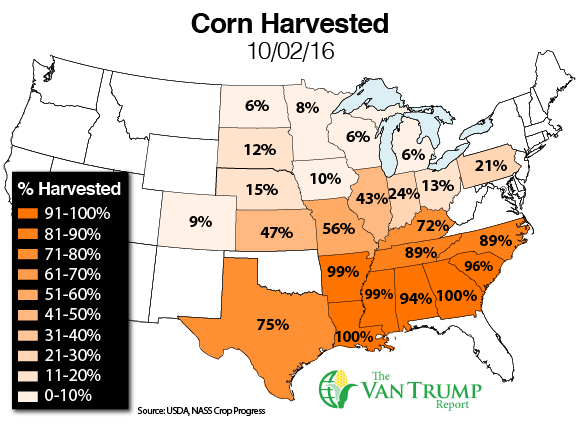