Soybean bears were happy to see yesterday's break in price, but we are still trading close to 15¢ above the $10.63 open posted on Monday. The bulls continue to talk about complications in Argentina and a crop in Brazil that appears to be getting a bit smaller. The bulls also continue to talk about good U.S. demand and the very real possibility that Brazil could run out of export supply sooner than many had forecast.

The bears continue to talk about Chinese demand and the fact it might start to taper back, especially as Chinese officials begin to sell a large portion of their domestic government surplus. The bears are also talking about more acres being planted to soybeans here in the U.S., perhaps 84-85 million will ultimately make it in the ground?

The next question starts to become yield, and will U.S. weather cooperate enough to allow farmers to grow a 46.7 bushel per acre average? Technical support in the JUL16 contract remains down around the psychological level of $10.50 per bushel; support for the new-crop NOV16 contract seems toned down around $10.30.

I included the graphic below to provide a point of reference for the current USDA soybean crush estimate. There's a fair amount of debate between the bears and the bulls about the meal spread on the board. The bears say they simply aren't seeing the cash side of the trade reacting or responding anything like the futures. And that they current new-crop USDA estimate might be a far reach.

There's also a ton of debate regarding the nearby spreads. For what it's worth, the JUL16-DEC16 spread has traded out to a fresh new record high. The bulls argue with the nearby crush-margins so strong and ample supply in hand the numbers are justifiable. Longer-term I suspect if South American production pulls back a bit further and acres next year are negatively impacted by the upcoming La Niña the bulls could perhaps argue their case for an extended period of time. This is something we will obviously be keeping a close eye on in the days and weeks ahead.

I continue to contend that nearby the market is focused on political headlines out of Brazil, logistical complications involved with getting quality meal out of Argentina and the upcoming U.S. weather forecasts. If there are no fresh bullish headlines in any of these three areas the market will more than likely pull-back. As a producer I remain patient with all hedges still in place. As a spec I would like to be buyer on a much deeper break in price...staying patient! 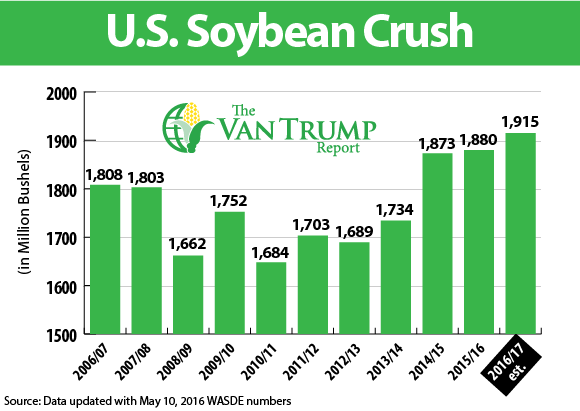