Be careful betting on the obvious in the soybean market

Soybean traders continue to talk about the massive rally in meal. There have been rumors that some large traders and funds have been caught on the wrong side of the market. Interestingly, some traders were talking about how Chinese meal might soon pencil into the U.S. ports. Not that it will happen, but certainly crazy to think about.

There's also a lot more talk about soybean prices in Brazil, when paid in "reais," now being higher than they were back in 2012, when U.S. prices were close to $18 per bushel. In other words, the Brazilian producer is enjoying a big windfall, hence more than likely going to forward price and plant a massive crop going into 2017. The bulls warn that the geopolitical complications swirling inside Brazil have the banks nervous and perhaps less likely to loan.

The bulls also continue to point towards the possibility of a La Niña weather pattern causing complications for South American producers in late 2016 or early 2017. As a producer, I'm sticking with my longer-term game plan and staying patient. There are just too many headlines circulating at the moment to get overly aggressive.

As a spec, there's a ton of eyes on the spreads, particularly in trying to short the old-crop contracts. Personally, I think "bear-spreading" this market at the moment is still extremely risky and that there are easier shots to take. Be careful in this market betting on what is believed to be the obvious!

GET ALL THE INFORMATION OF THE DAILY VAN TRUMP REPORT. 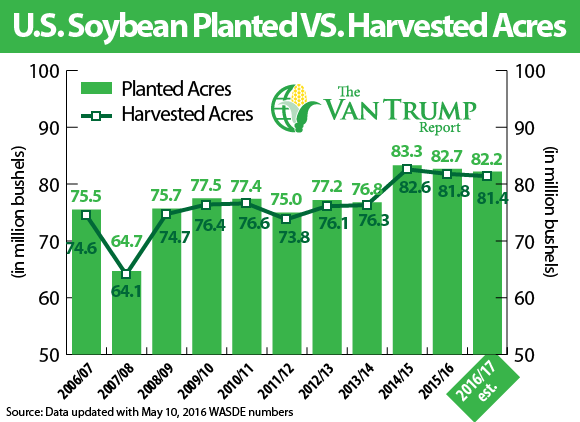